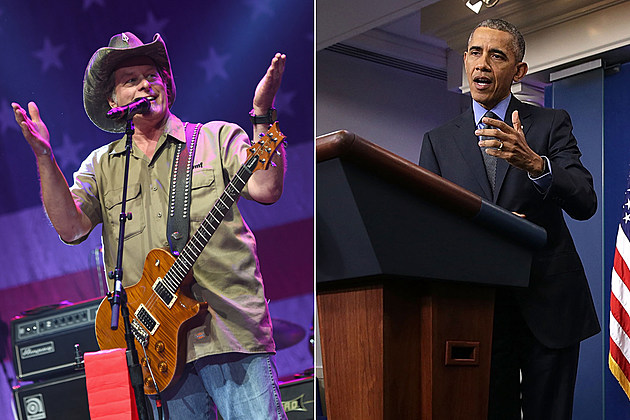 To say that staunch NRA supporter and rock legend Ted Nugent and President Obama don’t see eye to eye would be a huge understatement and that widening chasm between viewpoints was on display after President Obama’s recent speech on gun control and violence.

During an emotional speech on Tuesday (Jan. 5), a teary-eyed Obama made an impassioned plea for a national “sense of urgency” to help limit gun violence. To help drive home his point, Obama introduced Mark Barden, whose son was killed in the Sandy Hook Elementary School massacre. Obama spoke of greater background checks for gun buyers and stated that his actions were “not a plot to take away everybody’s guns.” He also spoke of requiring fingerprints to unlock guns for usage similar to how iPads have fingerprint usage technology.

In a Facebook post, Nugent responded, “I will write a comprehensive piece on the Chicago scam artist in chief on his latest lies about tyranical trampling of the 2nd Amendment but know it ye all goodmen everywhere that his ongoing criminal oath violating INFRINGEMENTS would NOT have stopped nor will ever stop ANY mass shootings or crime that anyone is aware of. He is a psychopathic America hating liar. Period. Even his freedom hating AG made it perfectly clear she is ‘…. keeping a close eye on gun owners….’ instead of repeat criminal thugs. Dear God in heaven America is going down fast! Give NRA mbrshps to everyone you know TODAY!!”

Nugent didn’t stop there, posting an NRA video and adding, “Join the mighty NRA & give as many memberships as possible to as many people as possible to help crush the oath violating criminal infringing US government gone mad. Obama is the enemy of America. Period.”

Back in 2012, Nugent’s anti-Obama comments earned him a meeting with the Secret Service. He had stated in an interview that if Obama was re-elected President, he would “either be dead or in jail by this time next year.”

Where do you fall in this discussion? Feel free to voice your opinion in the Comments section at the bottom of this post.