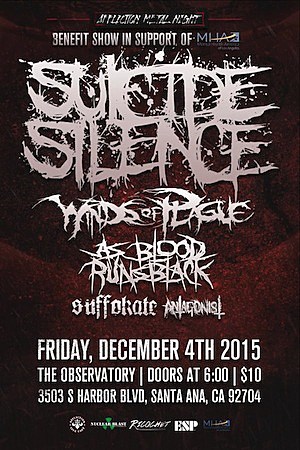 Suicide Silence are looking to give back to their fans in a big way this holiday season and have organized a benefit show teaming up with Mental Health of America Los Angeles. Featured on the bill are more deathcore heavyweights. Winds of Plague will be playing their only show of 2015. As Blood Runs Black, Suffokate and metalcore stalwarts Antagonist are also part of the bill. The show will be held Dec. 4 at the Observatory in Santa Ana, Calif. with Suicide Silence making a donation from the show.

Detailing the reason for the show, vocalist Eddie Hermida stated, “We’re proud to announce Mental Health America of Los Angeles as the benefactor of our donations this Christmas. Suicide Silence has always had a deep connection with our fans and over time we’ve come to notice that so many of our younger fans feel lost or left behind in such ways that their mental health takes a turn for the worse.”

Adding to this, he continued, “More often than not, their conditions go undiagnosed or untreated and they’re left with the the tortures of ‘dealing’ on their own. MHALA is an organization that shares our passion for early action in these matters and seeks real solutions to the societal issues that propel mental illness. We applaud them, we support them and we will fight to make this world a less frightful place for those in need.”

Those unable to attend can still make a donation. When doing so, select “Special Project” and enter “Suicide Silence” to make sure your donation winds up at the right place.

The benefit show will be the last of the year for Suicide Silence as the band is gearing up to enter the studio to record the successor to You Can’t Stop Me. The album was the first to feature vocalist Eddie Hermida as he replaced the late Mitch Lucker.

Eddie Hermida also rejoined his previous band, All Shall Perish, following what the band described as a lengthy legal battle “over control of the band’s name, royalties and other assets.”