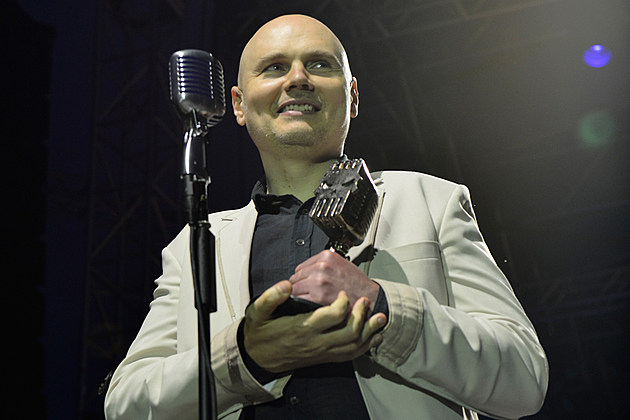 Congratulations to Billy Corgan and his wife Chloe Mendel, who welcomed their first child today, Augustus Juppiter Corgan. The baby boy was born over a month ago, on Nov. 16 Us Weekly reports, so the couple have a knack for dodging paparazzi and laying relatively low, despite both being celebrities in their own right.

Corgan famously fronts Smashing Pumpkins and Mendel is an artist and daughter of fashion designers Gilles Mendel and Jenny Mui. The couple are 26 years apart with Corgan at 48 and Mendel at 22, born the same year Smashing Pumpkins released their sophomore effort, the multi-platinum Siamese Dream. The album reached No. 10 on the Billboard 200 charts, propelled by singles like “Cherub Rock,” “Today,” “Disarm” and “Rocket.”

The singer recently lamented the loss of former Stone Temple Pilots and Velvet Revolver singer Scott Weiland in an open letter posted on the Smashing Pumpkins’ website. He called Weiland one of the “great voices of our generation” after describing his experiences watching the band come onto the scene and later dominate the music world.

Monuments To an Elegy, the latest Smashing Pumpkins disc, was released in 2014 as part of the Teargarden By Kaleidyscope album cycle loosely inspired the Tarot. The album reached No. 10 on the Billboard 200 and was the second full length release in the series, following 2012’s Oceania.