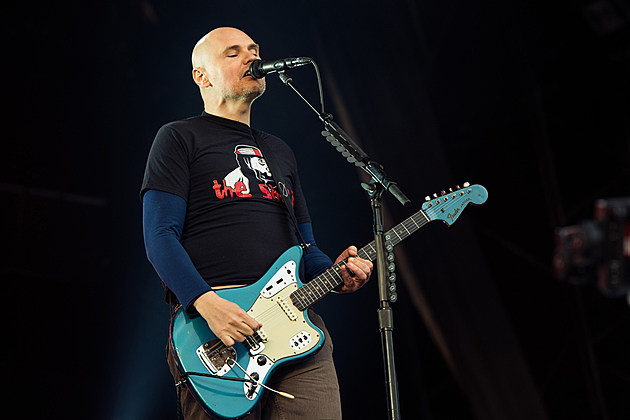 Billy Corgan has done Zwan, recorded a solo album and has been quite prolific in his second era of Smashing Pumpkins, but there still remains some fascination with the core four members who generated some of the ’90s most memorable music while playing in Smashing Pumpkins. Corgan recently sat down for a lengthy interview with TV personality Jennifer Weigel and several stories have surfaced as video pieces online. But Alternative Nation reports that they uncovered audio from the interview in which Corgan shares his thoughts on his former bandmates and once again addresses the idea of a reunion.

Initially appearing annoyed by the question of whether it’s time for a reunion with the original members, Corgan thoughtfully addressed the question when Weigel rephrased her question with the idea of whether it made sense to sit down and have tea with either James Iha and D’Arcy Wretzky who have remained estranged during Corgan’s revival of the band.

Weigel asked, “Would you like to know who they are now?,” to which Corgan responded, “I know who they are … and they know who I am. When you spend that amount of time with somebody, of course they matured … I think the only way to answer every one of these questions is … I have no interest in doing anything that’s inorganic. I have people in my band now that I talk to and they don’t want to talk to me and I don’t want to talk to them. If they were lying on the side of the road, I would stop my car and bring them to the hospital, but we don’t send Christmas cards to each other. There’s no relationship.”

He went on to add, “When you’re talking about the natural human instinct to find forgiveness and heal a relationship, I think that never ends. That’s a human thing, it has nothing to do with the band or people creating memories. The business of it all, I find quite gross … I think people rarely get out of those things [original reunions] what they think they’re gonna get. Because when a relationship breaks, and I would take it back more to something you’ve experienced in your family life or your romantic life, whatever, when a relationship breaks there are times it’s not gonna get any better. It’s what it was for what it was, underneath a particular set of circumstances.”

Corgan concluded, “There’s no temptation there for me [for a reunion]. Strictly on my part I think it’s like, ‘Would I like to find peace?’ Absolutely, of course. But beyond all the other stuff … I can’t even imagine that being able to watch.”

In the years since the initial incarnation of Smashing Pumpkins, Corgan has played off and on with drummer Jimmy Chamberlin. In 2014, Wretzky expressed interest in finding out about Corgan’s well being. And while Corgan has not always been the most complimentary, he did praise all three of the original band cohorts during a 2013 interview.

See the Yearbook Photos of Billy Corgan + Other Rock Stars

You Think You Know Smashing Pumpkins?