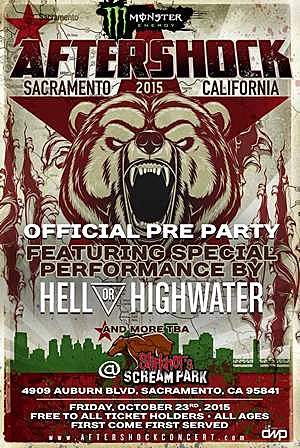 Slipknot‘s Scream Park in Sacramento, Calif., will feature haunted houses and live horror entertainment. With Slipknot set to perform at the Aftershock Festival in Sacramento in October, it makes perfect sense for the venue to host the festival’s pre-party on Oct. 23.

Slipknot’s Corey Taylor and Shawn “Clown” Crahan are executive producers of the attraction that includes three different haunted houses called “Prepare For Hell,” “Clown’s Playhouse” and “Skin Ticket.” Slipknot’s Scream Park will be open Oct. 2 through Nov. 1. Watch a trailer about this year’s attraction below.

A limited number of those with Aftershock tickets will be admitted to the pre-party by showing proof of ticket purchase. The event will include music from Hell or Highwater and other festivities. Guests will also be able to go through the haunted houses for a discounted price of $15. More details about musical performances and how to gain admission to the pre-party will be released soon. For info on general admission to Slipknot’s Scream Park, click here.

As for the festival itself, it features a high-profile lineup of artists such as Slipknot, Faith No More, Deftones, Shinedown, Marilyn Manson, Bring Me the Horizon, Breaking Benjamin, Seether, Coheed & Cambria, Stone Temple Pilots and many more performing on four stages. See the full details here. That same weekend, Slipknot’s Knotfest will be taking place in San Bernardino, Calif. For more details on that fest here.

You Think You Know Slipknot?