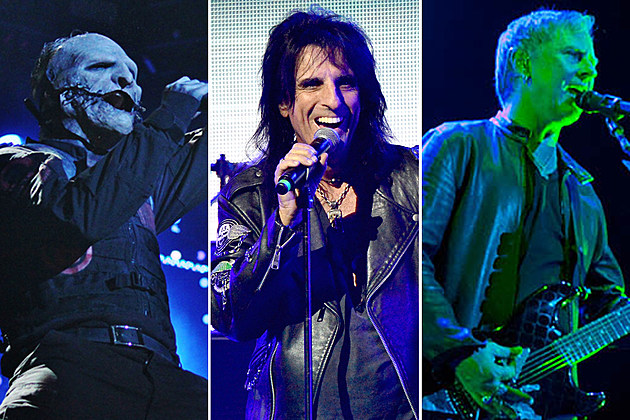 Wisconsin will rock again this summer as the annual Rock Fest is back for its 23rd year. Organizers have revealed that Slipknot, Hollywood Vampires and Alice in Chains will be the headliners for the three-day Rock Fest, taking place July 14-16 in Cadott, Wis.

The mighty Slipknot have played many a festival in their time, but this will be the band’s debut appearance at Rock Fest. As for Hollywood Vampires, their shows have been rare so far. The all-star collective, led by Alice Cooper, Joe Perry and Johnny Depp, have played only a handful of gigs and will perform at the Grammys later this month, but their appearance at Rock Fest is a true “get” for the festival. And Alice in Chains are currently working toward a new album and the addition of the rock vets to the lineup should make for a standout music weekend.

Others confirmed for the festival include Five Finger Death Punch, Breaking Benjamin, Marilyn Manson, Rise Against, Bullet for My Valentine, Skillet, Queensryche, All That Remains, Scott Stapp, In This Moment, Sick Puppies, Saint Asonia, 10 Years, Atreyu, Highly Suspect, Escape the Fate, Nothing More, Like a Storm, Red Sun Rising and Kix.

You can also look for Art of Dying, New Years Day, Faster Pussycat, Wilson, I Prevail, Stitched Up Heart, Wayland, Bridge to Grace, Bobaflex, 3 Pill Morning and a number of tribute acts saluting the likes of Led Zeppelin, AC/DC and Nirvana among others. See the full lineup, including the number of “ink master” tattoo artists who will be on hand, at this location. You can also look for Showdown Fest, which includes a number sideshow acts and freak shows.

For ticketing and camping options, be sure to check here. Pre-sale tickets sold out in less than two hours last year, so make sure you get in on tickets early. General on sale tickets, camping and Morrie’s Pit Passes will be available Tuesday, Feb. 9 at 8AM CT at this location.

You Think You Know Alice in Chains?