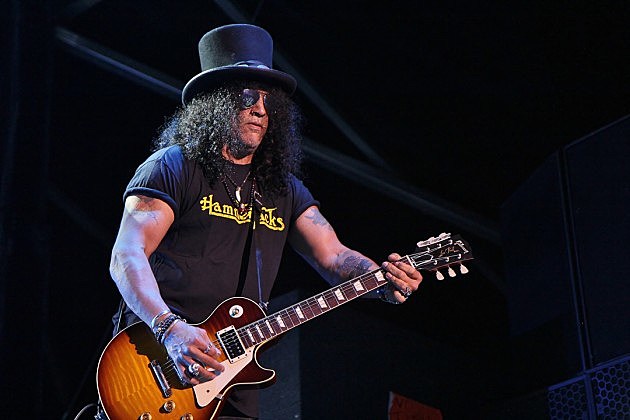 Slash and his band are in the process of wrapping another tour leg in support of his World on Fire album, but fans of the guitarist may not have to wait too long for the next disc after they finally conclude their touring.

In an interview with the Inland Valley Daily Bulletin, it’s reported that Slash is 90 percent done with the writing for his next studio album. The guitarist revealed, “I live for live performing, but I can’t perform live if I don’t record.” As for his new music, he reveals, “The stuff for the next record is really great. One of the cool things about this band is that instead of peaking early and burning out is we’ve started at one place and escalated in terms of our creative inspiration.”

He adds, “It keeps getting better from record to record which is a really nice thing to have happen so yeah, we just seem to get more in a groove the longer we stay together and the harder we work on the road and so on. It just seems to come out in the new material.”

Slash says the next step in the process is pre-production for the album and he expects to go into the studio with Myles Kennedy and the Conspirators in the spring of 2016.

And that’s not all that’s on his plate. The guitarist, who has his own Slasher Films production company, is dipping his toes into the film world again. “I’ve also got The Hell Within to shoot sometime in the beginning of the New Year so that’s the immediate stuff,” states the guitarist. Slash intends to finish up his touring overseas with dates that run through Nov. 24.