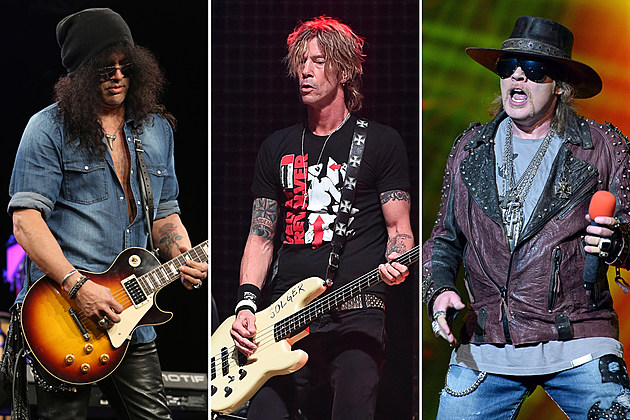 The rumors have been rampant for weeks and now we know at least three of the classic era Guns N’ Roses members will be taking the stage at Coachella in April. A new statement from Guns N’ Roses confirms that guitarist Slash and bassist Duff McKagan will be joining Axl Rose when the band takes the stage this spring.

The performance will mark the first time since 1993 that the three GN’R members have shared a stage together. McKagan has made onstage appearances with both Axl Rose and Slash in recent years, but the Axl/Slash dynamic had remained fractured until this past year, when the guitar great revealed that he and Rose were back on friendly terms.

Slash’s revelation came quickly after the exits of guitarists Ron “Bumblefoot” Thal and DJ Ashba from the most recent incarnation of Guns N’ Roses, which led many fans to start connecting the dots on a potential reunion.

Though Rose, Slash and McKagan have all been confirmed, the remainder of the lineup is still a mystery. It is not known if past members like Izzy Stradlin, Gilby Clarke, Steven Adler or Matt Sorum will take part. Keyboardist Dizzy Reed, whose tenure actually spans both significant eras of the band, has not been confirmed, but he would probably be the most likely addition to the trio. Some rumors have suggested that drummer Frank Ferrer and guitarist Richard Fortus from the most recent incarnation would help flesh out the band, but it’s all speculation at this point. So enjoy letting the mind spin with possible combinations until an official confirmation is made.

Guns N’ Roses will headline the two Saturdays of Coachella — April 16 and April 23. Remaining passes will go on sale tomorrow (Jan. 6) at 11AM PT. Check the Coachella website for additional lineup and ticketing information.