After tours with HammerFall and Gamma Ray in 2015 and the release of their highly-successful debut album (“As Daylight Breaks”), melodic metallers SERIOUS BLACK are busy working on songs for their upcoming sophomore album. The band now also has unveiled the dates for their upcoming first headlining tour (support acts will be Sinbreed and Messerschmitt). 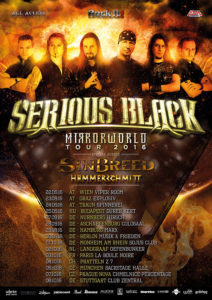