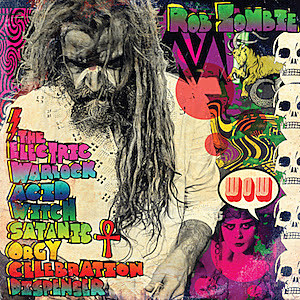 The album, which finds Zombie flanked by his stellar crew of John 5, Piggy D and Ginger Fish, will be released on April 29 via UMe / T-Boy Records. The group worked on the disc with acclaimed rock producer Zeuss behind the boards.

“I can easily say this is my favorite album yet… no joke. Yeah I know every f–king a–hole says that. But it is seriously our heaviest most f–ked up musical monster to date. One song entitled ‘Well, Everybody’s F–king in a U.F.O.’ is sure to be an instant Zombie classic! Not since Hellbilly Deluxe have I spent this long putting an album together. It was worth it.”

And yes, it is a Zombie album down to the last detail. Rob employed artist Alex Horley to create the artwork for the disc and the album’s centerfold is something that truly must be seen to be believed.

Though the disc isn’t available until April, you can already stake your claim on one of the albums when it arrives. Zombie has set up a direct pre-sale where fans can pre-order the new album as well as exclusive merchandise. “This time I’m not just putting out a new record like everyone else,” says Zombie. “I’m offering it directly from me to YOU along with a ton of other limited edition, exclusive badass shit like new album merch, posters and the chance for you to be in THE ELECTRIC WARLOCK ACID WITCH SATANIC ORGY CELEBRATION DISPENSER MOVIE!” For more info on the pre-sale, click here.

In addition, the cover art for the album and the track listing have been revealed. You can check out both in this post. And keep an eye out for the new Zombie-directed movie 31, which will premiere at the Sundance Film Festival later this month. Be sure to catch Zombie and his band hitting the festival circuit this spring at these locations.