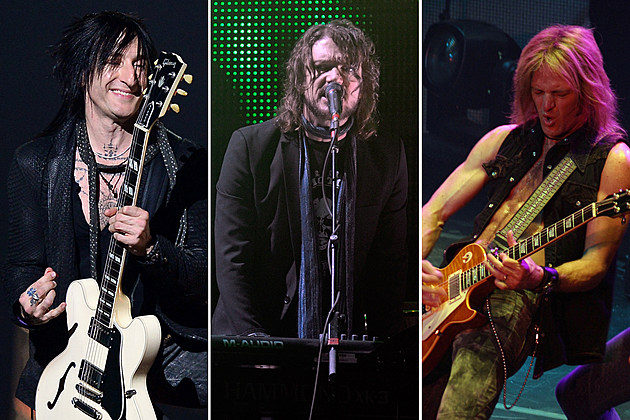 The Dead Daisies will have a different look the next time you see them. The band, which consists of a number of name performers from bigger rock acts, is losing the services of Richard Fortus and Dizzy Reed.

Though the duo have not yet been announced for the Axl Rose, Slash and Duff McKagan-led Guns N’ Roses shows taking place this year, both Fortus and Reed have been heavily rumored to be participating in the Guns N’ Roses shows and their exit from Dead Daisies would seemingly add fuel to that talk. In statements released to Metal Hammer, the pair were reportedly leaving for “a momentous project in 2016.”

With Fortus leaving, the band found themselves in need of a new guitarist and Doug Aldrich, best known for his work in Whitesnake and Dio, will deliver his sick licks for Dead Daisies.

“I’m very, very happy to join my friends Marco, Brian, John and David in the next chapter of The Dead Daisies. I love the band and I’m looking forward to getting busy on the new record,” said Aldrich. “This band is bringing back a raw, back to the bones sound that a lot of groups go for but The Dead Daisies are looking to nail. At this point in time, we are looking to have a kick ass Rock ‘n Roll album in the can by spring 2016.”

Fortus, who had a hand in picking Aldrich, stated, “”When we started speaking about finding someone to replace me, the first suggestion I had was Doug Aldrich. It doesn’t get any better than Doug in my book. I am so happy that he is able and willing to step in and take over. I think that it will elevate the band to the next level. Thanks to everyone that has supported the Daisies over the last couple of years. Stay tuned to see what they come up with next. I’m sure you won’t be disappointed.”

Fellow guitarist David Lowy said of the exiting Fortus and Reed, “It’s been a privilege and a pleasure to write, record and perform with such talented world-class musicians and all-around great guys. I’ve personally learned so much from both of them.”

The current Dead Daisies lineup features vocalist John Corabi, guitarists David Lowy and Aldrich, bassist Marco Mendoza and drummer Brian Tichy. Mendoza recently revealed that the band was about to go into the studio to record their next album, which is expected later this spring.