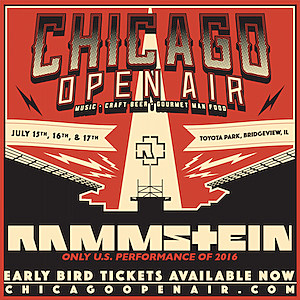 The inaugural Chicago Open Air festival will be making its debut between July 15-17 at Toyota Park in Bridgeview, Ill. this summer. So far, German industrialists Rammstein are the only band who has been announced, but securing such a coveted live act is an impressive start!

The appearance is the only 2016 show Rammstein will be playing in the United States and marks the first time the group will set foot onstage in Chicago since 2012. They underwent a brief hiatus as members explored other creative avenues, but declared they’re “back on” in October of 2015. While fans are still awaiting a follow-up record to 2009’s Liebe Ist Für Alle Da, a chance to see them stateside should keep them tied over for now.

Perhaps the most excited individual is Chicago Open Air producer, Danny Wimmer, who stated, “Rammstein is an act that is headlining major festivals all over the world. I’ve been trying to get Rammstein here for years and I couldn’t be more ecstatic to launch Chicago Open Air with them. If you’ve never seen Rammstein LIVE before, you are in for a real treat.” For those who are unfamiliar, Rammstein’s show employs heavy use of pyrotechnics and frontman Till Lindemann is known for getting up close and personal with fire.

The rest of the lineup will be announced next week on Feb. 16 at 5PM CT. For those who don’t need any more convincing to purchase their ticket, discounted early bird general admission three-day tickets are available for purchase at the festival’s website.