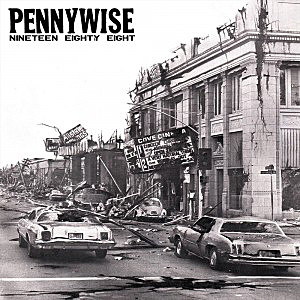 Pennywise have been carrying the punk rock torch since 1988, but for many the first exposure to the band was their 1991 self-titled debut disc for Epitaph Records. However, longtime fans will get a chance to dig even deeper into their history with the release of the Nineteen Eighty Eight LP on May 20.

The band and Theologian Records are teaming up with Hardline Entertainment to reissue their earliest recordings on a single platter. You’ll find music from the A Word From the Wise and Wildcard EPs, as well as tracks from the Soul Arch compilation that included the group’s covers of Black Flag‘s “Gimmie Gimmie Gimmie” and Ben E. King’s “Stand By Me.” The Nineteen Eighty Eight LP will be released on colored vinyl with blue and green opaque options, as well as a very limited edition 180 gram blue and white swirl that will be numbered and signed by the band.

“For me it’s a great honor to release these early recordings,” says Hardline Entertainment’s Ken Seaton. “These tracks were the band’s first recordings in a professional studio. I remember the day we got the test pressing and went to my print shop and put it on my record player. The hair on my arms stood up as I heard the songs come alive on wax. It was surreal. We then printed the covers, took apart another EP cover to use as a template and we all started cutting, folding and gluing our share. From the forming of Pennywise, to building carpet cave practice spots, to going to numerous backyard parties and shows, printing flyers and tees to think that this band might actually go somewhere was not only very special to myself and the band, but to all of us in the South Bay.”

Theologian Records’ Marc Theodore adds, “I’ve always felt the record was great but at the time I thought A Word From The Wise would be the only record I’d ever release. For me, it opened the door to so much more. It was the genesis of Theologian Records leading to numerous releases from local to international bands, to co-owning a recording studio with Fletcher, Byron and Justin (98 Mute), as well as a couple more Pennywise releases! Has it really been over a quarter of a century since that first record? I’m stoked the band is going just as strong as ever and can’t thank Pennywise enough for sticking with me all these years.”

To get more of an idea of what to expect, check out the songs “No Way Out” and “Gone” in the player provided below and see the track listing for the effort. Nineteen Eighty Eight is currently available for pre-sale at this location.

Pennywise, “No Way Out” and “Gone