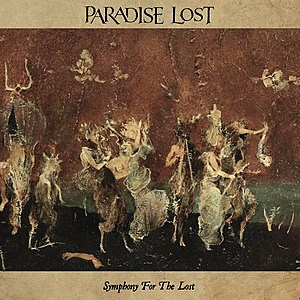 Recording a live album in a typical club, arena or festival setting can be challenging. Add an orchestra, choir and ancient Roman amphitheater, and it becomes downright daunting.

The legendary British band Paradise Lost were up to the challenge, which is evident when you watch or listen to their DVD/2CD release Symphony for the Lost.

The show was recorded with the Plovdiv Philharmonic at the Theatre of Phillippopolis in Plovdiv, Bulgaria. Paradise Lost worked with conductor Levon Manukyan, who has collaborated with Tarja Turunen and also given the classical treatment to works by Judas Priest, Marilyn Manson, Nirvana and other metal and hard rock artists.

Paradise Lost have used orchestration in the studio many times over the years, and when it came to choosing the setlist, they selected some of those along with tracks they thought would lend themselves well to classical arrangements. The result is a wide-ranging collection of songs.

They play “Victim of the Past” from their most recent album The Plague Within that was released in June. They go all the way back to their second album with the title track from 1991‘s Gothic. The remainder of the 17 songs span the last two decades. During the show the crowd is really into it, and frontman Nick Holmes keeps them engaged between songs as well.

Paradise Lost’s doomy and gloomy music meshes perfectly with an orchestra, and believe it or not, this is the first time in their long history that they have had the opportunity to play a live show with an orchestra and choir.

In addition to the concert, the DVD also includes a documentary about how everything came together for the show. The acoustics of an ancient amphitheater are not designed for a modern amplified metal show, and getting the sound of the band, orchestra and choir blended properly was a difficult task.

They pulled it off beautifully. The sound quality is excellent, and the orchestral arrangements complement the songs very nicely without overpowering or overshadowing them. Paradise Lost picked a stunning setting to play a unique concert, and Symphony For the Lost does a great job capturing one of the most memorable shows of their career.