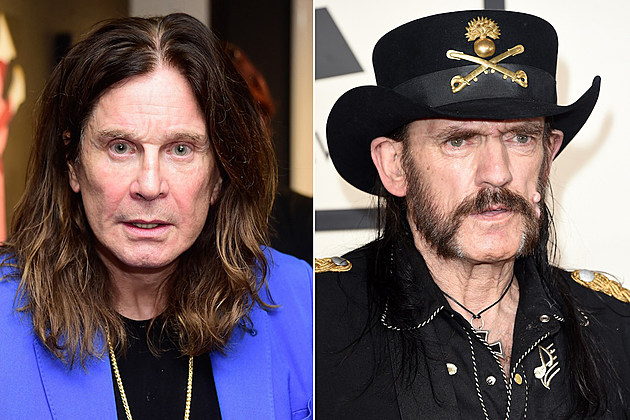 Ozzy Osbourne‘s tribute to Lemmy Kilmister isn’t just a quick few sentences. The Prince of Darkness put together an amazing piece for Rolling Stone. Ozzy didn’t just lose a friend of 40-plus years, he lost someone who he considered to be a hero.

Ozzy and Lemmy share more than just being rock ‘n’ roll veterans. Motorhead supported Ozzy Osbourne on his first solo tour, while Lem helped Osbourne write tracks like “Mama, I’m Coming Home,” “See You on the Other Side” and “I Don’t Want to Change the World,” the last of which won a Grammy.

“I phoned him up two days ago, and I couldn’t make out one word he was saying,” Ozzy recalls. “Yesterday, I got a text from his manager saying, ‘Lemmy’s on the way [out], and he wants to see some of his friends.’ So my wife and I were just about leaving the door and the text came saying he’d gone. It shook me up bad.”

Anyone can tell you about Lemmy’s hard partying with booze and speed, but Ozzy was one to see the Motorhead legend’s brainy side. “To look at Lemmy, you’d never think he was as educated as he was,” Ozzy says. “People look at the music we do and the way we look, and they go, ‘Oh, this bunch is a bunch of yobbos. They don’t know what they’re doing. They’re bad people.’ But it’s not true. Lemmy looks like an old biker, but he was so well read. He was very up on a lot of things. He was a very clever guy. On his bus on the first tour, he had a plaid suitcase and all he had in there was a pair of knickers and a pair of socks, and the rest was books. When he stayed with us, he’d stay in the library for three days, reading f—ing books.”

Ozzy finishes his piece by elevating Lemmy to the status of “hero.” “You know what? There goes a hero for me. He was my hero,” Ozzy reveals. “He was f—ing great, a good friend. I’m missing him already. I’ll never forget him. I don’t think a lot of people will forget Lemmy. He’ll be so missed in my camp. He was a good guy, a good man, a good friend of mine. He was just a f–king great dude, man. Not enough time for him.”

Check out Ozzy Osbourne’s full tribute to Lemmy over at Rolling Stone.