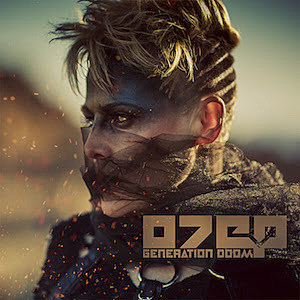 Otep are readying their seventh studio effort, Generation Doom, out April 15 on Napalm Records. Having incorporated a variety of styles ranging from nu metal, rap, alternative to gothic influences, the shape-shifters can simply be categorized as extreme.

The album will be the first to boast the newest rhythm section consisting of bassist Corey Wolford and drummer Justin Kier, who both joined the band in 2013. Frontwoman and band namesake Otep Shamaya is the only original member left in the group and she couldn’t be more excited for the release of Generation Doom.

“Revolution is the opiate of the artist. In pain. We remain. But healed in the sweet addiction to art. We are,” said the singer. The record appears to be quite personal as, in a shroud of mystery, she continued, “For this album, I unleashed my soul and allowed it to soar freely. I communed with the moon in the chrome of its light. I kissed the sun at its fiery height. I waged war with the Nightmare Kings, I sinned with the opalescent women in the roaring seas of poetry. On a cycloptic mare, hooves made of iron and air, I charged into the inky heart of art and roared at the old gods in the ashes of their ruin.” Closing her statement, Shamaya exclaimed, “You can’t look away, WE ARE YOUR MISTAKE. WE… ARE… GENERATION DOOM!”

Otep’s last album, Hydra, was released in 2013 and was the first album to feature programmed drums in the band’s extensive recording history.

Pre-orders for Generation Doom can be placed here.

See the Most Anticipated Hard Rock + Metal Albums of 2016