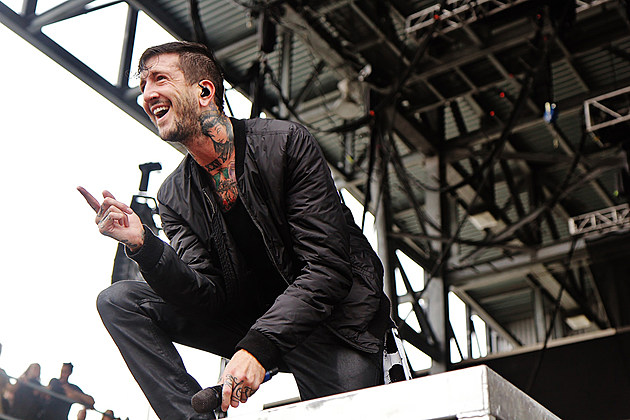 It’s been a rough year for Of Mice & Men vocalist Austin Carlile, as he was hospitalized toward the end of the band’s spring touring, revealed his continued challenges with Marfan Syndrome, underwent multiple surgeries to help him continue to combat the genetic disorder and then this fall while rehearsing in the studio, he got electrocuted by his microphone. And according to a new tweet from the singer, he’s got more surgery planned.

The rocker was answering a few fan questions on Twitter when one of his followers revealed that they were about to undergo major heart surgery and were freaking out about the experience. They asked Carlile for any tips or words of encouragement. That’s when he revealed that he had more surgery planned for himself. His tweet reads:

Judging by the hashtags, it’s likely that the hip and back surgery are related to his Marfan Syndrome condition. Earlier this year, Carlile had a piece of his rib removed. Marfan Syndrome affects the body’s connective tissues and is often associated with the heart or aorta area.

In a 2014 interview with Full Metal Jackie, Carlile revealed past issues with his neck as well. “I had actually hurt my neck and because I went a while without getting it taken care of — it was pushing up against the back of my heart and because I have heart issues, they thought it was this whole big deal. So I spent a good three days in the hospital, two nights in the ICU,” stated Carlile. At the time, the vocalist underwent physical therapy to help him through the pain, but it looks by his tweet that the neck needs attention again.

The band has been off tour since Carlile had his surgeries earlier in the year, allowing the vocalist the time to recover. However, the group has started throwing their name in the hat for several festivals in 2016. Of Mice & Men have also used the downtime to work on material for their next album.

Watch Of Mice and Men’s ‘Never Giving Up’ Video