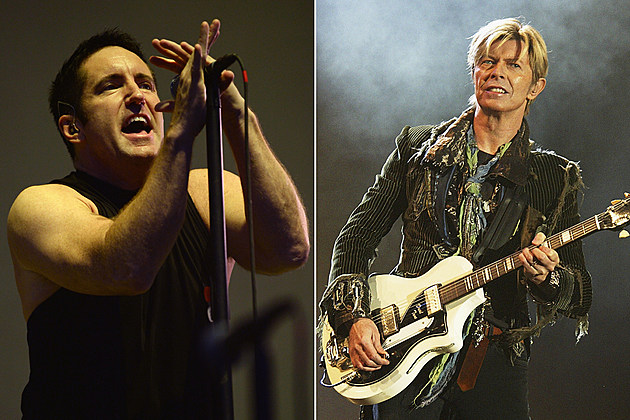 In the latter portion of David Bowie‘s career, one of the most beloved tracks in his catalog was “I’m Afraid of Americans” and many fans will remember the dark and unsettling video where Nine Inch Nails‘ Trent Reznor stalks the musician through the city streets. In real life, Reznor was not a stalker, but was definitely a fan and he’s penned a personal tribute about Bowie for Rolling Stone.

In the piece, Reznor reveals that Bowie was highly influential on his musical upbringing, citing the Scary Monsters album as his introduction and then revisiting the Berlin trilogy of albums later that truly left their mark on him. “I was in full obsession mode with Bowie,” says Reznor. “I read into all the breadcrumbs he’d put out — the clues in his lyrics that reveal themselves over time, the cryptic photographs, the magazine articles — I projected and created what he was to me. His music really helped me relate to myself and figure out who I was. He was a tremendous inspiration in terms of what was possible, what the role of an entertainer could be, that there are no rules.”

By the mid-’90s, when Nine Inch Nails were hitting new heights, Bowie reached out to Reznor to collaborate. “It’s hard to express how validating and surreal the whole experience of the Outside tour was,” said Reznor. “To actually meet this man in the flesh and find out, to my delight, that he passed any expectation I had. The fact that he was this graceful, charming, happy, fearless character became a new point of inspiration for me.”

He recalled, “At one of our first meetings, in rehearsals, we were talking about how the tour was going to go. I was faced with a strange predicament: At that moment in time, we’d sold more tickets than he did in North America. And there’s no way on earth David Bowie is going to open for me. And on top of that, he said, ‘You know, I’m not going to play what anybody wants me to play. I just finished a strange new album. And we’re going to play some select cuts from a lot of Berlin trilogy–type things, and the new album. That’s not what people are going to want to see, but that’s what I need to do. And you guys are going to blow us away every night.’ I remember thinking, ‘Wow. I’m witnessing firsthand the fearlessness that I’ve read about.’” For Reznor, his favorite moment of the tour came when Bowie joined him onstage to perform “Hurt.” He recalled, “I was outside of myself, thinking, ‘I’m standing onstage next to the most important influence I’ve ever had, and he’s singing a song I wrote in my bedroom.’ It was just an awesome moment.”

Reznor recalls being a mess during the tour, dealing with the trappings of fame and numbing himself with drugs and alcohol to cope. But Bowie had been through some of those things in his life and left him with some wisdom that saw him through — “You know, there is a better way here, and it doesn’t have to end in despair or in death, in the bottom.” It was a full year later before Reznor hit rock bottom and though he enjoyed spending time with his idol, there are some mixed feelings.

Years later, a sober Reznor crossed paths with Bowie again and he recalled the graciousness of the singer as he attempted to explain his past behavior and was met with a hug and a congratulatory, “I knew you’d do that. I knew you’d come out of that.”

He concludes, “I didn’t think we were done. It feels like the loss of a mentor, fatherly figure, someone looking out for you, reminding you that in a world where the bar keeps seeming to be lower, where stupidity has got a foothold, there is room for excellence and uncompromising vision.”