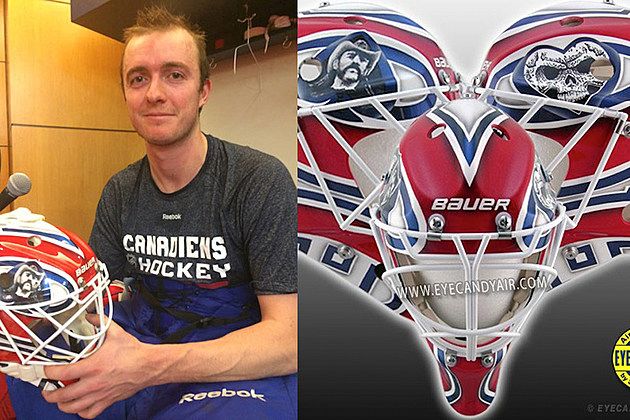 The sonic contributions of Motorhead frontman Lemmy Kilmister don’t just permeate through the world of music. Even sportsmen are feeling the absence of Lemmy. Montreal Canadiens goalie Ben Scrivens has immortalized Lem in his own way by getting a portrait of the Motorhead legend on his helmet.

Scrivens’ goalie helmet is now adorned with Lemmy Kilmister’s face inside an Ace of Spades, paying tribute to the iconic song of the same name. His mask’s back plate also hones the lyrics, “And don’t forget the joker.” The paint job was done by Steve Nash of Eye Candy Air.

“He’s a huge influence on not just me, but a lot of the bands that I listen to and a lot of the type of music that I listen to,” Scrivens tells NHL.com. “For me, he’s probably the epitome of heavy metal and rock music in terms of not just his music, but his attitude, his persona, his look. He’s an ugly guy, he’s got a gruff, ugly singing voice. He says what he thinks all the time, he’s swearing all the time, and it wasn’t an act. I think that’s the thing that came across from him, nothing was for show. You knew that when he went home and talked to his kid he was probably the exact same way.”

Scrivens adds, “He was an innovator and influenced so many people in terms of their musical expression. He was a real connection between that early rock and roll, starting to get into that heavy stuff, to the Metallicas and those bands. I don’t think there was a heavy band that he didn’t influence.”

Scrivens was actually traded to the Canadiens from the Edmonton Oilers on Dec. 28, the same day Lemmy died from his short battle with cancer.

In case you’re curious of the other logo featured on Scrivens’ helmet, that’s the logo of Canadian post-hardcore band Alexisonfire.

See Lemmy in These 10 Rock + Metal Musicians in Video Games