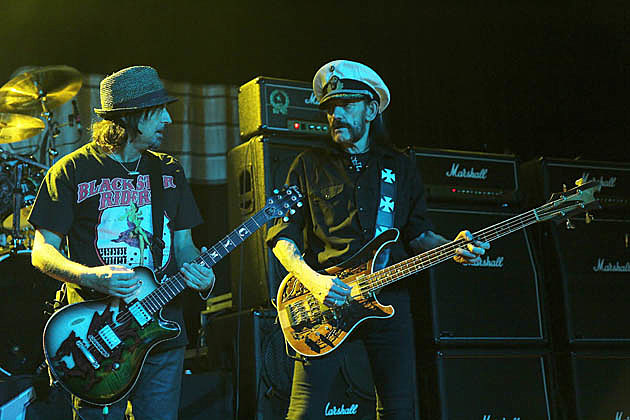 The death of iconic Motorhead frontman Lemmy Kilmister hit many hard, but none harder than his own bandmates. While drummer Mikkey Dee has sat in on a few Lemmy Kilmister tributes, guitarist Phil Campbell has kept a relatively low profile since Kilmister’s passing. The guitarist did however grant his first interview after the death of Kilmister to fellow rocker Chris Jericho on the Talk Is Jericho podcast.

“I’m still in shock actually. It’s like Slash told me, he was a constant. He’s always been here in our lives,” said Campbell. “At least he did it his way. I’m really proud of him. He lived as he wanted to live and there’s not a lot of people who can do that 100 percent.”

The guitarist missed out on Kilmister’s funeral as he was advised not to travel after dealing with his own health issues in recent months. But like many, he did watch the moving ceremony online in which many of Kilmister’s closest friends and peers spoke about the man that Lemmy was and shared their memories. “I watched it, but I haven’t watched anything else,” Campbell revealed to Jericho. “I haven’t read any more articles or anything because it’s really difficult for me at the moment. It will come. It’s just going to take a lot of time.”

Campbell says it’s still doesn’t seem right to him that Kilmister is gone, explaining, “I’ve broken down a few times and my wife’s like, ‘C’mon Phil, get over it.’ But I expect to be packing [for tour] now. Every two weeks I was going away for three weeks.”

The guitarist said that Kilmister had spoken to him about the idea of Motorhead continuing after he was no longer around, but Campbell says that’s something that will never happen. “I know Lem told me that he wouldn’t want anything to stop me or anything like that, but nothing’s ever going to be called Motorhead again. I can tell you that. I wouldn’t do that. I wouldn’t disrespect. It’s not Motorhead without Lem, is it?,” said Campbell.

When asked by Jericho what he’d miss most about Lemmy, Campbell responded, “I’d have the room upstairs and he’s be downstairs, and I’m come down in the middle of the night for a pee or whatever and he’d be at his table downstairs and I think I’ll miss [the late night talks] a lot.”

He also laughed about an ongoing bit they used to have as well, recalling, “I just miss being able to call him up and tell him he’s playing too f—ing loud onstage. ‘Turn it down you a–hole.’ I really miss that. And he’d be like, ‘What do you mean, you’re louder than me? You turn it down first.’ And I’d say, ‘No, you f—in’ do it.’ It was brilliant.” Campbell says no matter how hard they played, you could always make out every curse word they spoke to one another trying to get the other to budge.

Toward the end of the chat, Campbell did reveal that he’s planning on doing a solo album and goaded Jericho about singing on a track since he had previously made a guest appearance on a Fozzy song. The guitarist revealed that Rob Halford has also agreed to appear on said disc, but no other details were given.

Check out Phil Campbell’s full interview with Chris Jericho on Podcast One’s Talk Is Jericho in the player below.