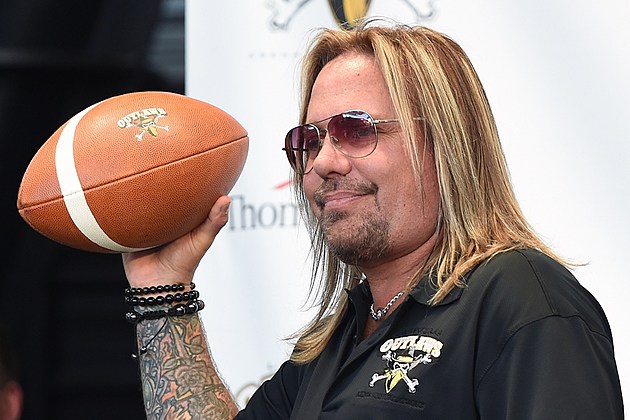 Vince Neil‘s arena football endeavor was not over when his team, the Las Vegas Outlaws, folded back in August earlier this year. The Motley Crue singer and two others have been accused of defrauding investors and are being sued by Sohrob Farudi for fraud, conversion, unjust enrichment, conspiracy and defamation according to Courthouse News Service.

Farudi is filing the lawsuit against Rockstar Investment Group along with Neil, who was chairman and CEO at the time, president Mark Daniels and treasurer and vice president Robert Hewko. Collectively, they claimed the Las Vegas Outlaws were fully funded with $3 million and sought a $500,000 investment from Farudi in August of 2014 in exchange for 150 of 1,000 shares of the team. Daniels and Hewko had previously told Farudi they owned the Arena Football League team the Jacksonville Sharks, which was unfounded, and had been awarded the Las Vegas team.

Things went awry when payments and fees due to the league bounced or were not paid whatsoever. Upon informing the AFL that the team’s finances were not being handled properly, the league commissioner ordered Daniels and Hewko to be suspended from the daily operations of the team and the AFL seized control of the franchise on July 14, 2015.

According to the Courthouse News report, Neil had also falsely reported to the Las Vegas Sun, “The investor was the managing partner who paid the bills and ran the team, business dealings, sponsorships and finances. That wasn’t our responsibility.”

It has been a rough week for the singer as he was also cited for excessive water usage in drought-stricken California, violating the regulated limit at his Danville residence. Neil was reportedly using over twice as much water on a daily average than the 1,000 gallon limit allowed. When he learned of the violation, he claimed he had not even been living at that house for the last five years.