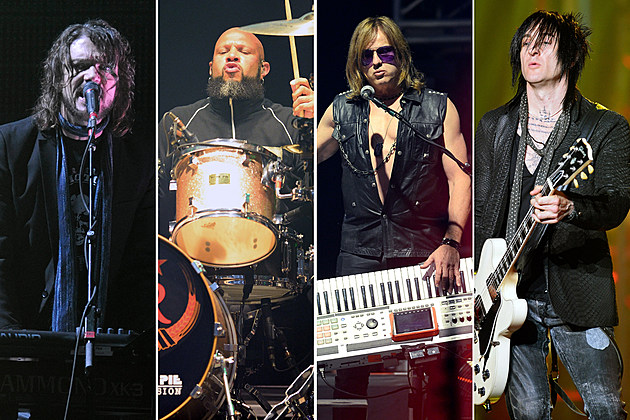 The biggest story of 2016 so far has been the shakeup in the Guns N’ Roses lineup, with some of the former members reuniting with Axl Rose for performances this year. So far, only Slash and Duff McKagan have been confirmed and the band’s only announced performances are at Coachella, but the full lineup is starting to become a bit clearer thanks to social media.

Drummer Frank Ferrer retweeted a congratulations notice from Flashback Heart Attack on Twitter that signifies that he and guitarist Richard Fortus would be part of the Guns N’ Roses lineup that would be taking the stage.

Meanwhile, journalist Mitch Lafon spotted a pair of tweets from Lisa Reed, the wife of keyboardist Dizzy Reed, that suggested that she was proud to be married to Dizzy and that their daughter was proud that her father was playing the same day as one of her favorites — Halsey. The show where the two acts would cross paths is Coachella, thus signifying Reed’s participation with Guns N’ Roses.

And finally, multi-instrumentalist Chris Pitman, who has played with Guns N’ Roses since 1998, stated in a photo posting, “Gonna B A fun time 2016″ with hashtags for Coachella, Axl Rose and Guns N’ Roses. See all three of the twitter posts below.

While the tweets would seemingly suggest that Ferrer, Fortus, Reed and Pitman are all involved in the Guns N’ Roses lineup, an official statement regarding their participation has not been announced.

As for those who have been confirmed, Slash further whetted the appetite of longtime Guns N’ Roses fans, posting a photo of his guitar in the studio as the band prepared to rehearse. Check out that post below.

So far, only the Coachella shows on April 16 and 23 have been revealed, but there has been plenty of speculation about the group being in negotiations for a tour of stadiums this summer.