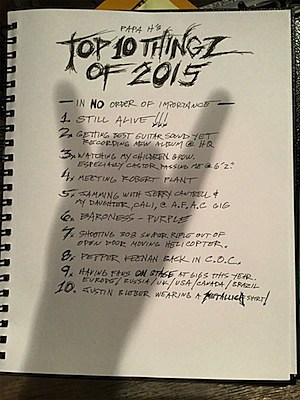 Yeah! As 2015 winds to a close, lists are made compiling the best of the year across a multitude of categories. Loudwire has already counted down the 20 Best Songs, 20 Best Albums and 10 Best Videos for the rock and metal genres independently and now it’s time to take a look at a list from Metallica‘s James Hetfield. The frontman unveiled his personal ‘Top 10 Thingz of 2015′ through the band’s Met Club fan club.

Making sure to notate at the top of the list “In no order of importance,” the Metallica mainman lists the best things to happen this year from music to family to fans. Though he clearly stated the list is in no particular order, putting “Still alive!!!” in the first slot surely foregoes the disclaimer. Also including in personal highlights are his son surpassing him in height and shooting a sniper rifle from a moving helicopter.

In regards to music, Hetfield lists the new Baroness album, Purple, Pepper Kennan rejoining Corrosion of Conformity to reunite the Deliverance era lineup, meeting Led Zeppelin singer Robert Plant and getting his best guitar sound yet in the studio while working on a new Metallica album.

Always grateful for his fanbase, he also listed having the opportunity to have fans join the band onstage in different countries along with pop sensation Justin Bieber rocking a Metallica shirt. Family and music met head-on on No. 5 as he got to jam with Jerry Cantrell of Alice in Chains along with his daughter.

It looks like Hetfield had a great 2015, but 2016 is where fans are really hoping him and the rest of the band will have a good year. Eagerly awaiting a new Metallica album, the first since 2008’s Death Magnetic, fans are hoping guitarist Kirk Hammett‘s prediction of a new album in 2016 rather than early 2017 will come true.