Metallica recently played a pair of shows in Russia, and have now posted “Fly on the Wall” footage of their St. Petersburg performance on Aug. 25. The 18-minute clip begins with a birthday “pie-ing” followed by the band rehearsing in the tuning room. Their performance of the song “One” from the show wraps things up.

Audio of the show is also available for purchase at this location. The show was bookended with “Fuel” and “Enter Sandman,” with such favorites as “For Whom the Bell Tolls,” “Sad But True,” “Nothing Else Matters” and their covers of “Turn the Page” and “Whiskey in the Jar” sandwiched in between. Many formats are available including MP3, FLAC and CD. You can also buy the Aug. 27 Moscow concert audio here.

In other Metallica news, an illustration of the monster Cthulhu, the subject of Metallica’s instrumental song “The Call of Ktulu” from their 1984 Ride the Lightning album, will be released tomorrow (Sept. 10) for Met Club members. One hundred of the 24″ x 36″ screen printed fine art prints will be available at $79.99. Check out the photo below.

Metallica only have three more concerts on their 2015 calendar. Two of the shows are in Quebec City, Canada. On Sept. 14 they’ll play the final show at Colisee Pepsi, and then on Sept. 16 will play the inaugural show in the new Centre Videotron. Their other gig is Rock in Rio on Sept. 19 in Rio de Janeiro, Brazil.

Metallica’s “The Call of Ktulu” Print 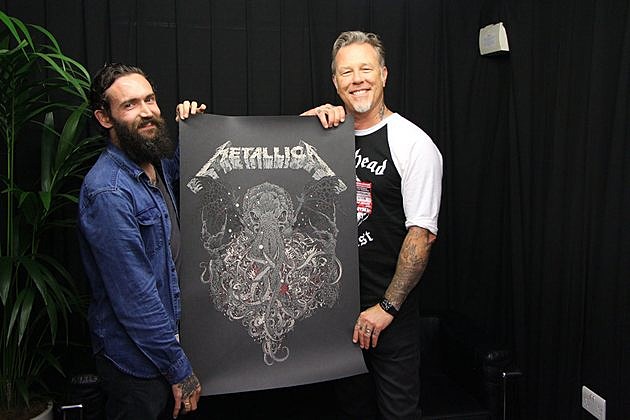