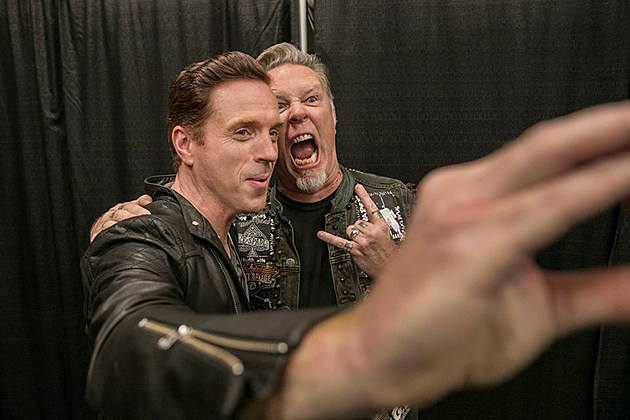 Bobby Axelrod, you’ve truly hit the big time. On the new hit Showtime series Billions, Damian Lewis stars as Axelrod, a financial wiz who has come under scrutiny by the U.S. attorney (Paul Giamatti) and in the episode airing tonight (Feb. 7), “Axe” decides to blow off some steam by attending a Metallica show. In the episode, Axelrod and his pals take a private jet to catch a metal icons at a show in Quebec and while the concert proves to be a great time, “Axe” is facing a difficult day.

The decision to make Axelrod a Metallica fan was a no-brainer for series creators Brian Koppelman and David Levien, who are both longtime Metallica fans themselves and enjoyed the chance to mix work and play. The pair wrote the episode with Metallica in mind.

“Even if Axe had a difficult time, it was one of the best days of our lives,” Koppelman told Billboard. “We’re with our actors shooting Metallica play ‘Master of Puppets.’ David and I don’t high-five each other very often, but we did then.”

As for getting Metallica to sign off on the appearance, luckily the pair had an “in.” Koppelman once served as the band’s A&R guy. “It was a huge thrill,” said Koppelman. “I pinch hit for a year. I got to be backstage with them and at soundcheck. I’ve been friends with [managers] Cliff [Burnstein] and Peter [Mensch] since 1989.”

Metallica fans may remember the band playing a pair of shows in Quebec last year, one to shut down an arena and the other to open a new venue. The performance at the new arena, Centre Videotron, served as the location for the shoot.

Levein recalls, “The band couldn’t have been more generous with their time. They have a warm-up room where they practice and lock in together as a band before they play. They allowed us to have [Axe] have access to that so it seems like he’s in the inner circle and, by extension, our crew was in there. That scene was shot maybe 40 minutes before they went onstage.”

Revisit the Anniversary of Metallica’s Debut Album, ‘Kill ‘Em All’