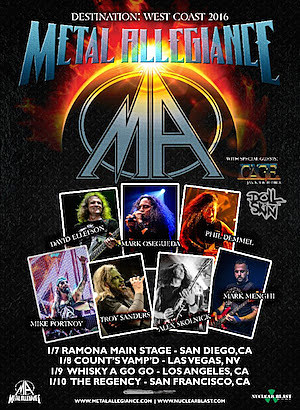 Metal Allegiance boasts one of the most powerful lineups ever conceived in the genre. Counting Mike Portnoy, David Ellefson and Alex Skolnick among its ranks along with Mark Menghi who directs the songwriting, the band has expanded to include even more metal stalwarts for their upcoming West Coast dates.

Joining the Allegiance will be Death Angel singer Mark Osegueda, Machine Head guitarist Phil Demmel and Mastodon bassist/vocalist Troy Sanders. Skolnick commented on this legion, saying he is “beyond excited to kick off 2016 playing MA originals and specially chosen covers — the first time with this unique lineup.”

The collective will be performing a New Year’s Eve show in Long Island, N.Y. before heading to the West Coast for four performances that will serve as a warm-up as the band readies themselves for Australia’s Soundwave Festival. Three dates in California and another in Las Vegas have been booked with power metal purists Cage providing direct support and glitter punks Doll Skin opening each show.

Echoing Skolnick’s excitement, drummer Mike Portnoy added, “We are so excited to bring the mighty Metal Allegiance experience to Australia for Soundwave… but we are also stoked to announce that we’ll be doing 5 exclusive warm-up shows in the U.S. before heading down! First we’ll be ushering in 2016 with a special New Year’s Eve show on Long Island for our East Coast friends and then head over to Cali. & Las Vegas for 4 very intimate club shows on the West Coast before heading Down Under for the mammoth Soundwave Festivals.”

Metal Allegiance’s self-titled debut came out Sept. 18, 2015 on Nuclear Blast. The already impressive lineup is bolstered by a slew of guest appearances, including Philip Anselmo, Lamb of God‘s Randy Blythe, Steve ‘Zetro’ Souza and Gary Holt of Exodus (Holt of Slayer as well), Charlie Benante of Anthrax switching roles from drums to guitar and over a dozen more of metal’s finest.