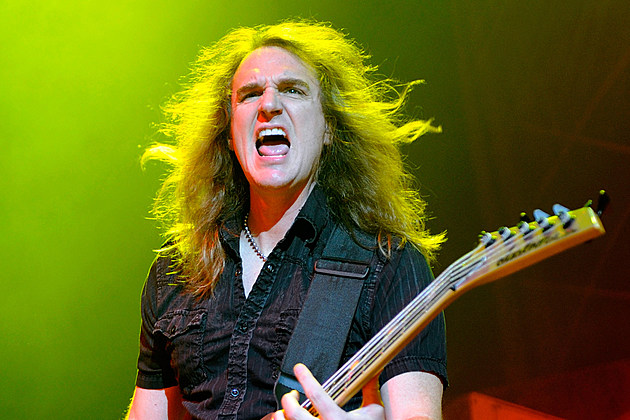 Bassist Jimmy Bain, who played in many different bands over the years including Dio and Rainbow and most recently with Last in Line, passed away Saturday (Jan. 23) at the age of 68. Megadeth‘s Dave Mustaine and David Ellefson were friends with Bain, and Mustaine posted a couple of tweets after he learned the news, with one of them saying, “Jimmy Bain has passed away. I’m saddened by the loss of my friend. David & I were very close with Jimmy. Godspeed!”

We recently spoke with Ellefson and asked him to share his thoughts about his friend Jimmy Bain. “I was so shocked and just saddened to hear that,” Ellefson says. “A year ago I played with him at Winter NAMM for Metal Allegiance. We did a show at the House of Blues the night before NAMM, and Jimmy came out and played, I think, a Dio and Rainbow tune with us. Dave and I had been close with him since as far back as when we did the Dio/Megadeth/Savatage tour for the So Far, So Good … So What! album back in 1988.”

Bain also indirectly played a role in the composition of a song on Megadeth’s legendary Rust in Peace album. Ellefson recalls, “Jimmy was such a sweet guy. Years ago I went over to his house over in Woodland Hills, and he had this amazing Yamaha endorsement. He had all kinds of basses, and I was just a young kid in ’89. We were just getting ready to make the Rust In Peace album, and I went over, and he loaned me an eight string bass. I took it home, I pulled it out of the case, and I started playing it, and immediately wrote the song ‘Dawn Patrol,’ which ended up going on the Rust In Peace record.”

Ellefson continues, “He was so cool. He never asked for it back. He was just like, ‘Here, just take it as long as you want.’ Of course, I gave it back to him, but he was just such an unpretentious, easygoing guy and I’m such a huge fan of his playing. When you hear him play you know it’s him, and of course he also plays with a pick. He’s a terrific songwriter, and his bass parts are like the riff of the song on the songs that he wrote. Just really one of the iconic British bass players in my book.”

Bain had been part of Last In Line since 2013. The band features his Dio bandmates Vivian Campbell and Vinny Appice from the Dio Last in Line album along with vocalist Andrew Freeman. Their new album of original songs, Heavy Crown, is due to be released on Feb. 20.