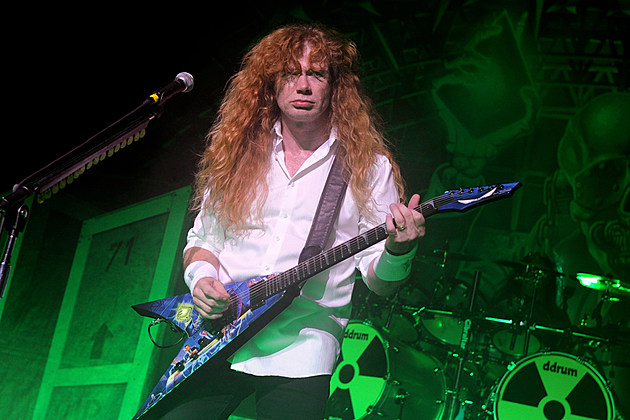 Megadeth‘s Dave Mustaine was the guest on Full Metal Jackie’s weekend radio show. The frontman discussed the band’s upcoming studio album, ‘Dystopia,’ due on Jan. 22. He also spoke about the group’s current lineup and hinted at Megadeth’s 2016 and 2017 plans. Check out the chat below.

It’s Full Metal Jackie bringing you two full hours of metal each and every week. On the show with us this week, the one and only Dave Mustaine. How are you doing, Dave?

I’m doing great, Jackie. How are you?

I’m doing good. Glad to have you back on the show. Obviously, very excited, the announcement has finally come: Megadeth’s 15th studio album, Dystopia, is coming out in January. Dave, do you feel eager, excited or something else as one of your albums gets closer to being released?

Yeah, this is really exciting. Every new release date always is exciting, you know, it’s like the people have had a kid, it’s a great feeling watching something take process, the whole creation to birth and then to see how it does. No one really know how records are going to do, you have hopes for it but I think we all have really high hopes for this one.

Dave, what effect did recording with different musicians, specifically Kiko Loureiro and Chris Adler, have on both the album and the band?

Well, it depends. The degree that they influence a band is up to the degree of willingness and open-mindedness of people who are in charge of writing and producing the record. Someone can be absolutely the greatest musician ever, but if his talents aren’t allowed to shine – if you don’t use those talents they’re never materialized and it’s another lost opportunity. For me, I like looking at different guitar players, some most people wouldn’t necessarily look at. Look at Marty Friedman, look at Chris Paul and look at Kiko. They’re all people who are kind of off the beaten path but they’re all interesting in their own unique ways.

Chris, on the other hand is totally a powerhouse and his style is very reflective of Megadeth’s early years when we had a more jazz-oriented approach towards metal, which I think Megadeth’s has always had more of a jazzier feel. So it’s great to be able to revert back to that more jazz-oriented metal approach with the rhythms.

Dave, you’ve stated that you wanted to return to your roots and make a trash album. What initially got you in that mindset?

Well, just because you say you want to do something like that doesn’t necessarily mean it’s going to happen. [laughs] There’s been a lot of times I’ve said that over the past and for whatever reason it just didn’t materialize, sometimes it had to do with me, sometimes it had to do with others. But I think that for the first time now, we’ve actually really embraced that part of us that made us a trashier band, a lot of it was how we were feeling and the way that we were looking at our lives at the time and just being – you know, instead of being disappointed – there’s a difference between having a bad situation and being depressed versus having a bad situation and being pissed and doing something about it.

What do you reminisce about most when it comes to younger years when you started playing music?

[laughs] Well, there’s a lot of things that I think about from those younger years, a lot of the technique playing. Sometimes I’ll joke with myself and say, “What was I thinking when I wrote that riff?” because some of them are pretty challenging and just kind of wondered what it was I was experiencing at the time because my music has always been really – kind of like a, I think a lot of my psychosis at the time; how I’m feeling, what I’m dealing with, you can usually tell by listening to the music. If I’m depressed, if I’m angry, if I’m excited about something, if I’m going through some personal victories or challengers or whatever, it’s always there in the music.

Dave, there was much speculation that the Rust in Peace lineup might regroup. How much consideration was actually given to that idea?

By myself or by everybody?

By myself, not as much as everyone else. I think that the reason behind that wasn’t really the same for some of us. And I just wasn’t really into it. I kind of liked the way things were in the history books, you know, the way that the fans had their own experience with the records and that stuff. And kind of wanted it to leave there because if you’re going to go back and touch the hallowed ground like that, you’ve got to do it at least as good or better and I just don’t think that us going and making a repeat of something that we’ve done in the past would honor any of our legacies; who we are, where we are right now, with our playing – our songwriting and stuff like that.

Do I still care about those guys? Of course I do, I think they’re nice guys and I wish the best for them and I always have. Just because we don’t get along musically doesn’t mean you want something bad to happen to any of your old friends.

Dave, what’s different these days about the things that give you a feeling of creative satisfaction when you’re in the studio?

There’s a lot of things that give me creative satisfaction in the studio. It’s just listening to what my heart says and sometimes there’ll be certain rifts, there’ll be certain parts that feel good, sometimes they’ll sound good that day and then the next day you enter the studio and they’re just not the same. It’s like, “Hey, that was a great idea.” Well, good thing there’s a mute button.

Dave, what can we expect in terms of touring here in the U.S.?

Well, we’re hoping to get some answers pretty soon about what our lineup is going to look like, who’s going to be playing with us and when we’re going to be touring. We’ve got some pretty good ideas of what’s going on right now; Chris Adler is sitting in for us in some dates and we’re still kind of looking at the opportunities that are in front of us and we’ll make our decision and we’ll go from there. And to tell you this much, we’re very excited about what’s going on for 2016 and into the summer of 2017.

Awesome. Well, looking forward to hearing more, Dave. Thank you so much.

Yeah, me too. You’re welcome, Jackie. It’s always great talking to you.

Thanks to Dave Mustaine for the interview. Megadeth’s ‘Dystopia’ album is due Jan. 22 and can currently be pre-ordered in a variety of options at the band’s website. Look for the band on tour at these stops. Find out where you can hear Full Metal Jackie’s weekend show at this location.