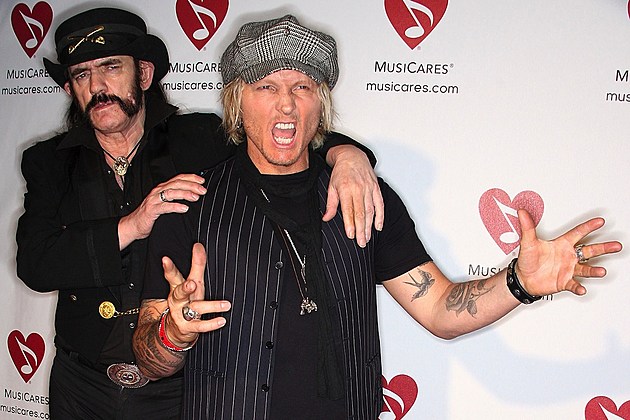 The outpouring of heartfelt tributes continue to flood in as rock and metal musicians reflect on the passing of Motorhead mainman Lemmy Kilmister. A walking embodiment of the true spirit of rock ‘n’ roll, Lemmy touched the lives of millions through his music and left a lasting impact on those who knew him through his affable personality. Former Guns N’ Roses drummer Matt Sorum had some moving words to say about the death of his friend.

The stickman filled in for Mikkey Dee in 2009 on the band’s Motorizer tour. The band’s longtime drummer was unable to fulfill his touring obligations as he was already locked in to appear on a Swedish reality TV show that was the equivalent of I’m A Celebrity…Get Me Out of Here!, so Sorum stepped up. Speaking with BraveWords, Lemmy explained the situation, stating, “Well [Dee] already had it booked you see. The tour came late. He didn’t tell anybody that he’d declared himself for this thing. Otherwise I would have insisted on him doing the tour, obviously. But seeing as it was a prior obligation, if you say you’ll be there… I think he’s already had the f–king shots, the anti-tropical disease shots.”

Sorum reflected on assuming the drum throne for Motorhead on the tour and his thoughts on Lemmy in general in a lengthy Facebook post, which reads:

Today we lost the greatest badass in the history of Rock n Roll , Lemmy Kilmister . He was a man who lived his life with no apologies and lived the dream of a life on the road playing music to thousands of fans worldwide. Lemmy loved RNR and his fans. Never took them for granted and rocked as hard as he could night after night . With his opening line at every Motorhead show
“We are Motorhead and we play Rock n Roll”
I met Lemmy in 89 when playing with The Cult in London in a small rock club called St Moritz . He opened his arms to me as I was new to the big leagues at that point . I felt accepted by him and that meant everything to me. The years ahead with Guns n Roses , The Cult and Velvet Revolver and travels on the road it was always a good time crossing paths with him . Likes Pirates on sailing ships . He was someone that carved the way and we followed by example . Stick to what you believe in , never waver and everybody else can f–k off . I got the call to play with Motorhead in 2009 and took the invitation meeting them in DC with no rehearsal . Although somewhat nervous the fans would kill me if I didn’t do the music justice . I played with the toughest rock n roll band in History and definitely the loudest . The best time was on the bus with countless stories from the very intelligent Lemmy.
A well read man and history buff.
It made you really love him like an elder statesman that you looked up too. A classic gentleman really.
That’s what he was for me . He taught me to respect myself and have respect and gratitude for the life we’d be given .
He will always remain in my heart as a guide to push on . Take no prisoners and never give up . The world of Rock is shaken today but thank god Lemmy was here to teach us how it’s supposed to be done .
My condolences to his band mates PHIL and Mikkey and his family and close friends .
God Speed my Friend , I love you and will miss you ,
Matt

Other rockers have reacted to the death of the iconic frontman, noting his unshakable and admirable character and spirit and, of course, his music which stands among the strongest discographies in the entirety of rock. Lemmy passed away yesterday (Dec. 28) just four days after his 70th birthday. The remaining members of the band released a statement breaking the news that he lost “a short battle with an extremely aggressive cancer” that he had only learnt of two days prior to his passing.