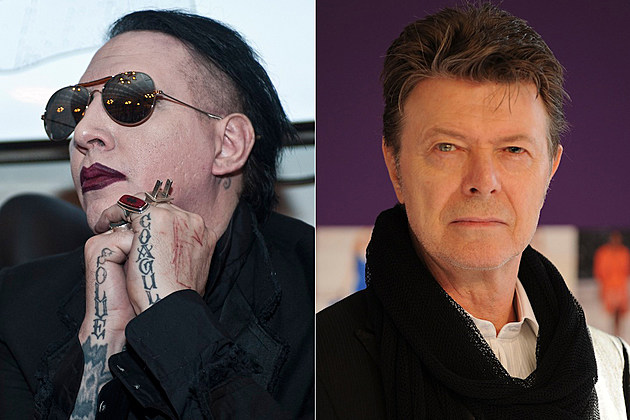 In response to the shocking and all too sudden death of rock legend David Bowie, Marilyn Manson contributed a piece to Rolling Stone detailing how Bowie’s music changed his life.

One could say Marilyn Manson would go on to craft his own unique version of what David Bowie created decades earlier. Imagery focused around androgynous sexuality was a concept David Bowie spearheaded with futuristic sensibilities. Manson, of course, would play on androgyny himself, but with a horror theme attached. The controversy which followed such imagery hit both Bowie and Manson once they began superstars, yet neither artist was brought down by detractors.

Musical connections can be easily found between Bowie and Manson as well. Both favored electronics within rock ‘n’ roll cores, also enveloping themselves within alter egos to give their music an added sense of believability and character.

“My first introduction to David Bowie was watching ‘Ashes to Ashes’ on MTV. I was confused and captivated,” Manson writes. “But it wasn’t until my first real stay in Los Angeles, around 1997, that someone told me to take a moment to listen to something other than Ziggy Stardust, Aladdin Sane and Hunky Dory. So I went for a dizzying car ride through the Hollywood Hills and listened to ‘Diamond Dogs.’ All of my nostalgia, instantly turned to awe. I was hearing him sing about fiction as a mask to show his naked soul. This changed my life forever.”

Manson adds, “This crushing moment of fear and loss can only be treated the way his music has affected everyone who was fortunate enough to hear and love it. Let’s NEVER let go of what he gave us.”

David Bowie battled cancer out of the public eye for 18 months before succumbing to the disease just days after his final album, Blackstar, was released. Read Marilyn Manson’s full letter at Rolling Stone.