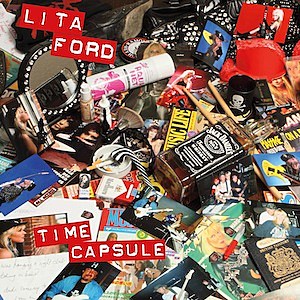 Rock goddess Lita Ford was one of the most powerful forces in heavy music in the ’80s, demonstrating metal was not just a male’s game. Shredding with the best of them and fronting her own band with a fearless stage presence and conviction in her voice, she dominated her realm. Her new album, Time Capsule, is a throwback to the glorious decade where metal reigned supreme and analog recording captured the raw intensity of the music.

Unearthing some music she had worked on in the ’80s, Ford said, “There was a s–tload of these 24-track analog tapes in the closet in my house (in the islands).” Upon the discovery she realized, “This is some of the best work I’ve ever done and it was sitting there. I grabbed two suitcases and took them back to the United States.” Nervous about the delicacy of the tapes, she added, “We could bake these f–kers — If you just put them on the reel, they would flake. I was chewing my fingernails, thinking, ‘Please work!  And they did!’”

In addition to the recordings being a throwback themselves, Ford enlisted the help of some of the decade’s most noted musicians, including Billy Sheehan (bass), Rodger Carter (drums), Dave Navarro (mandolin), Jeff Scott Soto (vocals), Rick Nielsen and Robin Zander (backing vocals) and Gene Simmons (bass).

Time Capsule will be out April 15 on SPV/Steamhammer and pre-orders can be placed here. The album will be released in a multitude of formats, including a digipak, vinyl and digital download.