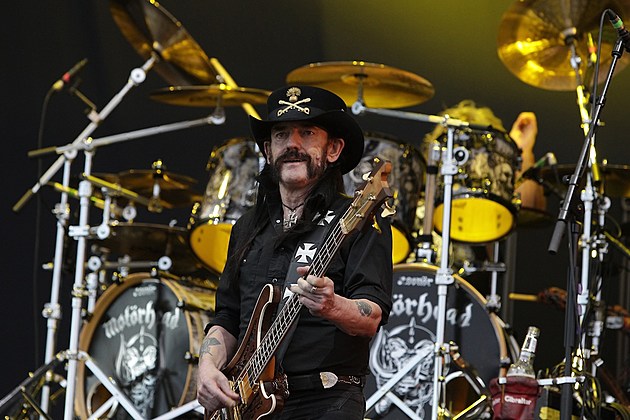 “God is dead.” The words have been etched in the annals of history by German philosopher Friedrich Nietzsche and now, with a heavy heart, they are applicable to the undisputed God of rock ‘n’ roll and heavy metal, Motorhead’s Lemmy Kilmister. One of the most recognizable faces in music, he epitomized what it meant to be uncompromising and in the most cut-throat of industries. Motorhead were not simply a band; they were a way of life and the gravelly voice behind the microphone echoed these sentiments with every word.

Lemmy was born on Christmas Eve, 1945 in Staffordshire, England. He found his first musical success as a guitarist with the Rockin’ Vickers in 1965, who released three singles and toured Europe. He left the group in ‘67 and floated around in and out of other bands until landing a gig as a roadie for Jimi Hendrix, a connection he made while living with Hendrix’s bassist, Noel Redding.

It wasn’t until 1972 that Lemmy would leave a permanent mark on the face of rock after joining the space rock outfit Hawkwind. Switching to bass, he applied his rhythm guitar techniques to craft his unique sound and was the engine of the band, driving the backbeat of the psychedelic group while the guitars traversed the boundless expanse of the universe. Most notably, Lemmy played on Hawkwind’s masterful double live album, Space Ritual, which is still regarded as one of the best live records to this day.

The bassist was already developing a reputation that he would carry with him all the way until the tail of 2015. Dismissed from Hawkwind following an arrest for speed, one of his many vices of choice, Lemmy pursued his own group. Originally wanting to call his band Bastards, he was told it would never work or get him anywhere. In a rare compromise, he changed the name to Motorhead, the title of the last song he wrote with Hawkwind.

The first Motorhead lineup consisted of the growing legend of Lemmy, guitarist ‘Fast’ Eddie Clarke and recently deceased drummer Phil ‘Philthy Animal’ Taylor. The three formed what is arguably the most formidable power trio to hit the stage and made their debut with a self-titled release in 1977. The album consisted of three Hawkwind covers and just four originals, but Motorhead was born.

The true Motorhead sound that we all know, and has been mostly the same since, came to be in 1979 with the indomitable Overkill. The next three records, Bomber, Ace of Spades and Iron Fist marked one of the greatest album streaks in the genre’s history, though Motorhead were quickly becoming a genre all their own, delightfully existing in the purgatorial gap between rock ‘n’ roll and heavy metal. While countless other bands catch flack for never reinventing their style or for becoming hackneyed parodies of themselves, Motorhead and their fans took pride in having another collection of songs that represented unadulterated rock with the release of each disc. The Motorhead legacy consists of 23 studio albums, averaging a new release less than every two years. Simply put, they all sound like Motorhead.

Onstage, Lemmy had a commanding presence, despite mostly standing statuesque behind the mic. By merely walking up there underneath the lights, the familiar face that stood untested in five different decades embodied why so many referred to him not as “the God” or “a God,” but just “God.” Never one for frills or tricks, he plugged in and turned all the way up, preferring the natural distortion from the his amplifier to do the work rather than utilizing pedals and tweaking knobs. Proudly branding themselves as “Everything Louder Than Everything Else,” Motorhead routinely blew the proverbial roof off of venues and left ears ringing for days. Over the course of their career, Motorhead released nine official live albums, all of which demonstrated their ironclad reputation.

The band’s lyrics were a direct reflection of Lemmy’s outlaw attitude, almost exclusively dealing with drinking, drugs, women, gambling, death and the verbal equivalent of a rigid, middle-fingered salute. The iconic frontman was a noted user of amphetamines, cocaine and had downed a bottle of Jack Daniels every day for nearly four decades, often imbibed with Coca-Cola. Taking delight in all of life’s pleasures, Lemmy was also one of rock’s most legendary men between the sheets, claiming to have slept with over 1,000 women.

A pop culture legend, the Motorhead mainman made several cameo appearances in TV and film. One of his most memorable moments came in the 1994 rock-based film Airheads. While trying to discern if the man speaking to him was an undercover cop or record executive, a member of the movie’s feature band the Lone Rangers asked “Who would win in a wrestling match? God or Lemmy?” Conflicted, the officer states “Lemmy” then changes his answer to “God.” The real answer? “Trick question! Lemmy is God!”

While we all have uttered the phrase before, our God started to show the cracks in his armor in 2013 as his life of debauchery was starting to take its toll. In a span of less than two weeks, it was revealed that Lemmy had a defibrillator inserted in his chest and suffered a hematoma, forcing the band to cancel a string of tour dates. One month later, Motorhead performed at Wacken Open Air in Germany, but had to walk off after six songs due to health issues surrounding the frontman.

Just six months later, news broke that the seemingly immortal bassist was diagnosed with diabetes and regrettably had to switch from the staple of Jack and Coke to vodka. He also drastically cut back on his cigarette smoking, whittling it down from two packs a day to just one or two cigarettes a day.

After staying out of the news for health issues for a short while, more ailments plagued our beloved Lemmy in the fall of 2015. After playing severely abbreviated sets and canceling gigs altogether, it was revealed he was battling a lung infection on the Bad Magic tour. At a show in Texas, he walked off stage after three songs. Returning with a cane in hand, a visibly weak Lemmy took the mic and exhaustedly uttered the words “I can’t do it.” The fans saluted him with cheers of “We love you, Lemmy!,” grateful to have been in his presence even if it was just for three songs.

Bent but unbroken, Motorhead continued to tour throughout the rest of 2015 in unparalleled road warrior fashion, demonstrating that even during the most trying times and pushing 70 years old, Lemmy was every bit the God we made him to be and if there was ever a chance to back down from his uncompromising ways, it would be universally accepted by the rock community. Instead, he stayed the course until the very end.

On Dec. 28, 2015, Lemmy passed away just four days beyond his 70th birthday. In a statement released by Motorhead, it was revealed that he had been battling a very aggressive cancer that he had learned about only two days prior.

We are forever grateful for the contributions of Lemmy Kilmister, a legend who is rivaled by none and revered by all. Thank you for everything, Lemmy.

You were Motorhead and you played rock ‘n’ roll.

Rockers React to the Death of Motorhead’s Lemmy Kilmister