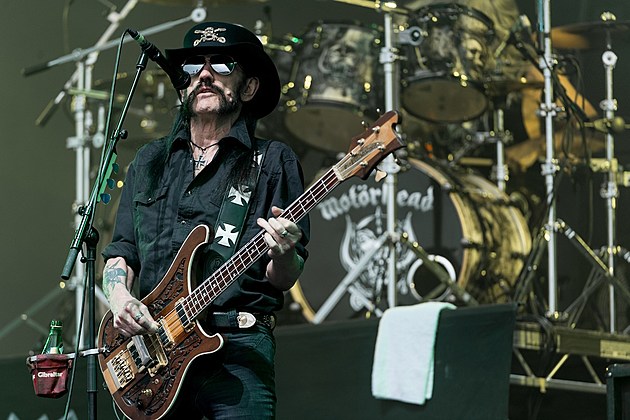 The documentary film Lemmy showcases the Motorhead leader in his natural element: either on tour or at the Rainbow Bar and Grill in Hollywood. Full of interviews from some of the rock’s elite, they all spoke about their admiration for the iconic frontman, which was highlighted by candid moments and conversations with Lemmy Kilmister. In light of the death of the film’s namesake, director Wes Orshoski recalled some of his favorite moments during the five years he spent shooting the rock god.

“When I think of Lemmy, I don’t think of the plume of smoke, or the cigarette expiring between his fingers, or the fruit machines or the whiskey — not even the jet-engine roar of Motörhead live,” says Orshoski via Billboard. “Not at first, at least. I think of reading glasses on the tip of his nose, three or four books open on a backstage table, or notepads full of doodles of spiders and swordsmen. I think of George Harrison playing in the background, or Ricky Nelson, or Live at Leeds.”

Peeling back the mask that Lemmy wore so well with his badass demeanor, Orshoski was able to capture the lightheartedness of the rock ‘n’ roll outlaw who lived a rather simple life on his own terms. Recalling more personal details, he continued, “I think about how he demanded silence whenever he played music, be it at home, backstage or in a tour bus, especially when it was the new Motörhead or Headcat record — or during the rare occasion someone was treated to tracks from his still-unreleased solo album, featuring the Damned, Dave Grohl, Joan Jett, Reverend Horton Heat, Skew Siskin and more.”

While his fans around the world proudly proclaimed he was immortal, the seemingly impervious Lemmy powered through mounting health issues right until the end. Orshoski discussed his unshakable character, stating, “Toward the end of shooting, in 2009, his legs bothered him often. There’s a scene in the beginning of the film where he walks into Amoeba Records in L.A., and he’s in pain the whole time. On a better night in Dallas, instead of standing outside signing, he had the crew bring fans into his dressing room in groups of two. They were shocked and overjoyed.” Fast-forwarding, he continued, “Months later, on the morning after that final night of shooting (and at the end of a long fall tour), I stopped by Lem’s hotel room in Moscow to say goodbye. He sat demoralized, wearing a pair of generic white hi-tops. The diabetes had swollen his legs to the point he couldn’t squeeze into his boots.”

After commenting on how Lemmy enjoyed his alone time, though it came across as a bit sad in the documentary, the director succinctly sums up the character of the Motorhead frontman, adding, “Lemmy made his own choices, and was content with them. Don’t feel bad for Lemmy. He did what he wanted to do when he wanted to do it, every day for the better part of six decades. I can’t say that about many people.”

To read Wes Orshoski’s full tribute, check out his commentary at Billboard.

Motorhead’s manager Todd Singerman expanded on the news that broke last night detailing that Lemmy had succumbed to an “extremely aggressive cancer” that had been diagnosed a mere two days before the legend’s passing. It was revealed that he had terminal brain and neck cancer and that he only had two to six months left to live.

Arguably the most revered rock musician up to the present day, musicians have been expressing their condolences and tributes to Kilmister, which can be seen here. Former Guns N’ Roses drummer Matt Sorum, who filled in on Motorhead’s 2009 tour, called him “the greatest badass in the history of rock ‘n’ roll.” Brian May, guitarist of Queen who guested on Motorhead’s last album, Bad Magic, penned a moving statement about his fallen rock brother as well.