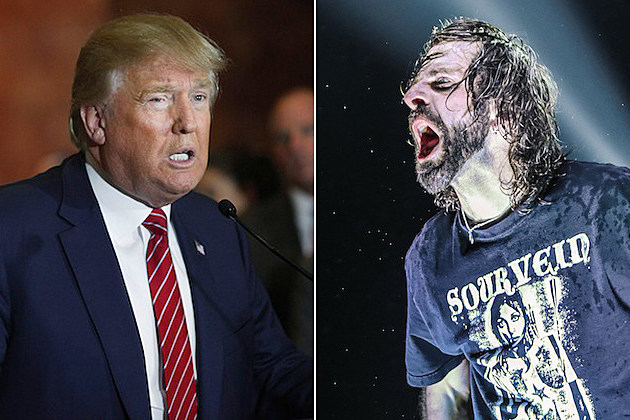 Republican presidential candidate Donald Trump has been stirring up all kinds of controversy lately, even within his own political party. The businessman has been labeled xenophobic by many, and Lamb of God vocalist Randy Blythe claims he’ll be leaving the United States if Trump gets elected president.

Plenty of musicians have commented on Donald Trump’s run for office, including Corey Taylor, Gene Simmons, Five Finger Death Punch‘s Zoltan Bathory and even a Nameless Ghoul from Ghost. Steven Tyler issued a cease and desist letter asking Trump to discontinue using Aerosmith‘s “Dream On” as his campaign song, while Twisted Sister‘s Dee Snider has given Trump his blessing to use “We’re Not Gonna Take It.”

Blythe has also spoken openly about Trump’s run in the past, but offered some new thoughts in an interview with Metal Insider. “I think he’s going to burn himself out,” Blythe says. “I think he’s going to say something so overarchingly stupid that people are finally going to be unable to accept what he’s saying anymore. But I almost think he’s a purposeful clown, a tool. I don’t know if he really wants to be President. He might just be a foil for the Republican party to say, ‘We gotta be tough right now in our international relations policy but not with this guy,’ so they’ll get someone who looks more moderate into office. They’ll say we still need to be strong, hawkish right now but no, not Donald Trump. I mean.. it’s ludicrous the things that he says. He’s making s–t up.”

Blythe continues, “I’m trying to read between the lines here and see if that’s what’s going on. If they’re in a back room somewhere and Donald Trump is saying, (in Trump voice), ‘I’m gonna say that we should pull a Nazi Germany maneuver and make all Muslims wear a yellow crescent moon on their arm’ like the Gestapo did with the Jews in Nazi Germany. He could just be a clown. If he is the president though, I am leaving America til he’s gone.”

We’re unsure if Blythe’s statements came before or after Trump announced a policy to ban all Muslims from traveling to the U.S. Check out the full interview with Randy Blythe over at Metal Insider.