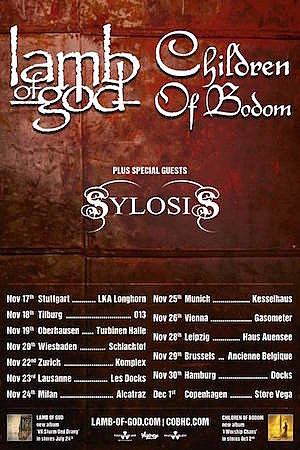 After the cancelation of last night’s show in the Netherlands stemming from security issues, Lamb of God have elected to drop off their co-headlining tour with Children of Bodom. While the U.S. group heads home, Bodom are shouldering on and trying to keep the tour going.

Lamb of God have followed suit with Eagles of Death Metal, Deftones, Foo Fighters and Prince along with other acts who have all backed out of all of their European shows.

In an effort to keep the remainder of their tour from being canceled, Children of Bodom vowed to try to make these shows happen. Releasing a statement on their Facebook page, the Finnish outfit said:

Lamb of God has chosen to leave the European tour due to security concerns in Europe. Our team has been working very hard to make all of the remaining shows happen. WE WANT TO, AND HAVE DECIDED TO, CONTINUE ON THE ROAD AND PLAY THE REST OF THE TOUR. Here is what we know so far.

Unfortunately the promoter has decided to move forward and cancel tonight’s show in Oberhausen, Germany, and the additional shows in Germany.

At this time, the remaining schedule will move forward as this (we ARE looking to add more shows FYI). We WILL keep you updated as we have changes, and we are doing our best to keep you informed as quickly as possible on everything.

Compounding with the ISIS attacks in Paris last week, there was a terrorist threat on Tuesday (Nov. 17) at a soccer stadium in Germany, which was set to host a match between Germany and the Netherlands. This led to the cancelation of the Lamb of God and Children of Bodom show last night in Tilburg, Netherlands. The promoter stated,

Because of the attacks on Paris last Friday that also took place in a music venue, a lot of stress is caused for bands playing in Europe. Combined with the terrorist threat that took place in Hannover, Germany last night, the bands are feeling too big a pressure to give the performance the audience is used from them and have decided to cancel their shows tonight. As of now, it is unknown if the bands will return for a replacement show later on.

To help the victims of the families who lost loved ones in the attacks, including Eagles of Death Metal‘s merch guy Nick Alexander, Josh Homme is using his Sweet Stuff Foundation to raise money. To make a donation, click here.