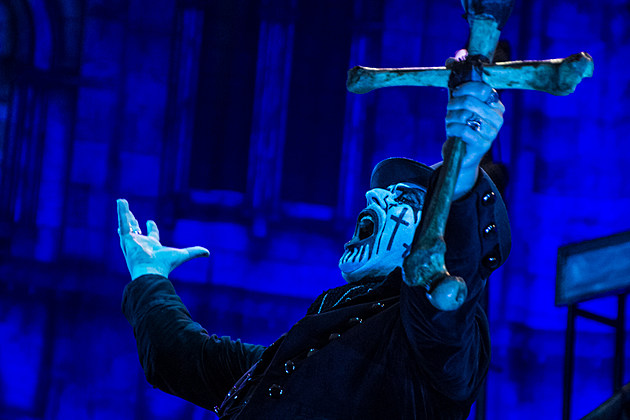 Earlier this week, it was revealed that King Diamond will be working on a new album in 2016. Fans have been waiting for a follow-up to 2007’s Give Me Your Soul… Please. After battling medical issues, including triple bypass heart surgery, the painted singer has returned to the stage, even filming two upcoming shows on the “Abigail in Concert” 2015 tour. That was a huge album in the band’s career and King Diamond is definitive when he says their next album has to be the best, even better than the legendary Abigail.

“It’s coming out when it’s done. It has to be one that can kill every other album we ever did,” King told the Guardian. He added, “Andy and I have some ideas already, and I have my own recording studio out here, which means that for the first time ever I will have the opportunity to build a 50-voice choir if I feel like it!” Feeling unrestrained, the singer continued, “No one’s there pointing at the clock, saying, ‘You don’t need to make it any bigger.’ It will be amazing to do it this way.”

Andy LaRocque had already said, “We’re gonna have a little break after this tour, and after that break, we’re gonna start writing music for the next album.” With the guitarist at his own home studio in Sweden and King in Texas, both have the luxury of recording from their houses. King has some extra inspiration at home with the supernatural at play.

Observing special powers at work in his home, the singer described his relationship with the supernatural. He said, “I welcome the powers of the unknown. I lived in a house in Copenhagen that was uber-haunted for many years, with flying teacups and things like that; there was a time when I saw glasses rising off the table, and I took it as a sign of something saying, ‘Hey, we’re with you,’”

Still experiencing this, he added, “They have shown themselves to me many times, and still do. We have four hotspots in this house now; they don’t visit often but just the other day, my wife walked into the kitchen after midnight and got a cold breeze blasted at her right when she turned the light on, like something was telling her to get out. She came back and said to me, ‘I guess I interrupted something!’”

King Diamond are currently on tour performing their 1987 classic Abigail with Exodus as support. Promising a stage design that will perfectly compliment the album’s narrative overlay, King Diamond will be putting on a spectacle. Two upcoming shows, Nov. 25 in Philadelphia and Nov. 28 in Detroit, will be used as source material for an upcoming DVD. Tickets are available for Philadelphia at the Fillmore here and Detroit, also at the Fillmore, here. Director Denise Korycki will film the concerts using nearly 20 cameras including GoPro cameras fixed around the stage.