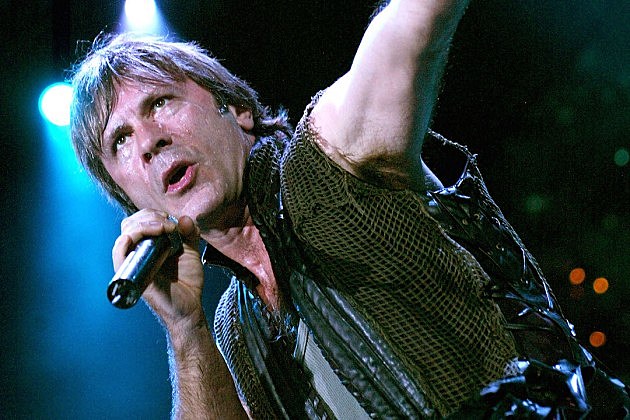 As the countdown to the release of Iron Maiden‘s next album reaches its final days, fan frenzy is hitting a fever pitch. Though most of us have to remain patient to hear all 92 minutes of The Book of Souls, a lucky group of Maiden fans were flown to Paris so they could not only experience the double album, but to hear from Bruce Dickinson himself that he hopes The Book of Souls will not be Iron Maiden’s final album.

Before Iron Maiden load up their gigantic new Ed Force One plane for the band’s upcoming world tour, Bruce Dickinson decided to personally fly his devoted Maiden fans on the 747-400 jumbo jet. After arriving in Paris, the fans were brought to Guillaume Tell Studios, where The Book of Souls was recorded. After mapping out the logistics of how the album was recorded, Bruce spoke about how his cancer was discovered near the end of the recording sessions.

Iron Maiden’s 2010 The Final Frontier album was originally though to be the final piece of Maiden’s discography, but thankfully that didn’t turn out to be the case. And The Book of Souls may not be Iron Maiden’s swan song either. “I really hope that this is not the last album,” Dickinson told the fans. “I’ve had way too much fun making this one. I’m gonna have way too much fun and enjoy the next tour for a variety of reasons. I’m happily chatting to you and running around and leaping around or flying airplanes. And the next stop is gonna be a tour and some singing.” Check out footage of the event at HardForce.fr.

The Book of Souls will see a worldwide release on Sept. 4. To grab a copy of the album or a variety of bundle packages, click here. Also check out a list of special listening events here.