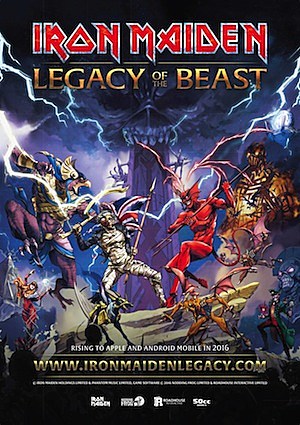 Iron Maiden will once again be returning to the video game arena with a full immersive mobile video game Legacy of the Beast. Available on both iOS and Android platforms in the summer of 2016, the role-playing game (RPG) will involve a search for shards of Eddie’s shattered soul, which have been scattered across space and time. Of course, pieces of Maiden’s historic discography will serve as the soundtrack.

Developed in collaboration with Roadhouse Interactive and 50cc Games along with the band’s management, Phantom Management Group, the free-to-play game will feature a vast array of elements from Iron Maiden’s album art. Eddie will serve as the focus of the game as players manipulate the famed mascot as he traverses through his world battling characters taken from the artwork with his unique abilities and powers. The soundtrack will also feature never before heard live renditions adapted specifically for the game.

Commenting on his excitement for Legacy of the Beast, Roadhouse CEO James Hursthouse said, “As a lifelong fan, I have always thought that Maiden’s music, lyrics and cast of characters would provide the perfect basis for a deep RPG experience.” He goes on to state that they aim not to appeal just to Maiden fans, adding, “With this game we’re creating an outstanding RPG that will appeal to all mobile gamers, including those discovering Maiden for the first time.”

As always, bassist and founder Steve Harris has had a watchful eye as the game was developed. “We always thought Maiden’s music and imagery with Eddie could be perfect for gaming,” he began, “and it’s something we have been looking at doing again since Ed Hunter in 1999. Now in 2016 it can all be done on a smartphone which makes it even more accessible for all our fans and also all the gamers out there.”

Ed Hunter was a first person shooter for the PC that saw Eddie conquer eight different levels full of Iron Maiden themes from their album covers. Along with the game came a companion greatest hits compilation featuring 20 fan-selected songs.

Eddie and the boys also released an interactive game based on their “Speed of Light” video off The Book of Souls. The iconic mascot travels through different era of video games collecting hearts and was turned into a side-scrolling game with a dedicated website.

Iron Maiden will be touring in support of The Book of Souls and North American tour dates can be found here.