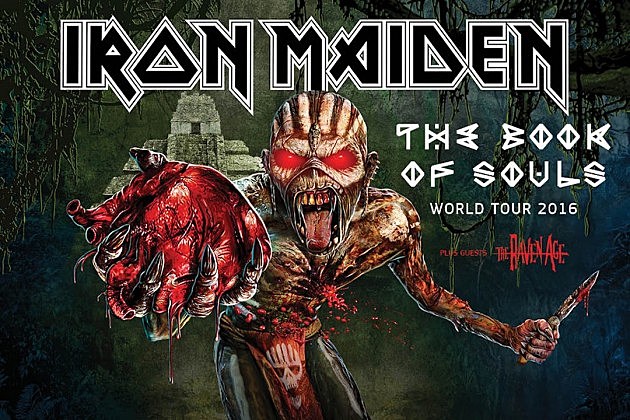 Iron Maiden‘s gonna get you in 2016! The legendary heavy metal band has revealed the routing for a 2016 world tour along with a handful of dates in Australia, New Zealand and South Africa.

Iron Maiden were already supposed to be on their world tour by now, but Bruce Dickinson‘s cancer scare halted those plans. Thankfully, Bruce has been given the all-clear by doctors, allowing Iron Maiden clearance to do what they do best, perform live.

In February 2016, Iron Maiden’s ‘The Book of Souls’ tour will kick off in the U.S. In early March, they’ll fly into Central America to visit Mexico, Costa Rica and perform in El Salvador for the first time. Maiden will go into South America to rock Argentina, Chile and a number of shows in Brazil before jetting back into North America at the end of March. After some extra U.S. shows, Canada will be treated to some Maiden during the first two weeks of April. Later on in April, Iron Maiden will hit Japan and perform their first ever gig in China. However, while the routing has been confirmed, the dates for these shows have yet to be revealed.

Finally, New Zealand, Australia and South Africa will be graced by Ed Force One. You can check out those tour dates, which have been announced and confirmed, below.