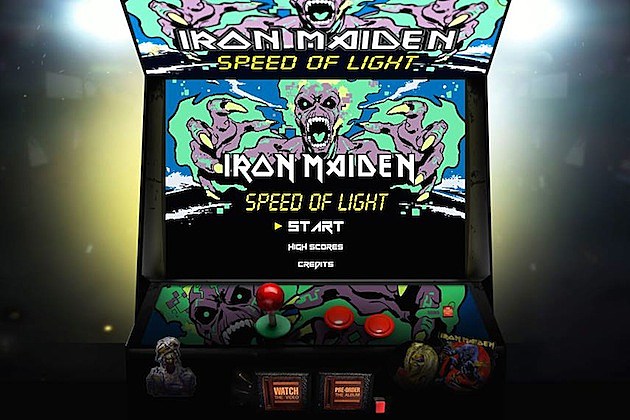 Iron Maiden just never stop giving the fans what they want. After releasing their video for “Speed of Light,” which pays homage to the history of video games, Iron Maiden have released an actual Speed of Light 8-bit video game you can play for free right now!

Speed of Light lets fans play one of the games found in Maiden’s “Speed of Light” clip. The 8-bit “climb-n-dodge” game lets you play as Eddie the Head himself as he seeks to destroy a baddy keeping a damsel in distress hostage. Your goal is to throw different projectiles at the boss to eliminate him and rescue the girl. The levels get increasingly difficult as the game progresses and just like in the “Speed of Light” music video, Eddie collects a heart after each goal has been completed.

The music video was produced and directed by Llexi Leon with animation and visual effects by the Brewery Production Company. “It seemed a perfect fit — 40 years of metal explored alongside four decades of video games,” Leon tells Metal Hammer. “I pitched this idea to [Iron Maiden manager] Rod Smallwood and the guys in the band. They loved the concept and asked if I could pull it off. I figured it was Iron Maiden, so I had to pull it off — and it had to be the best thing I’ve ever done.”

To play the Speed of Light video gave for yourself, head over to the band’s website. Iron Maiden’s 16th studio album, The Book of Souls, will see a Sept. 4 release. To pre-order the record, click here.