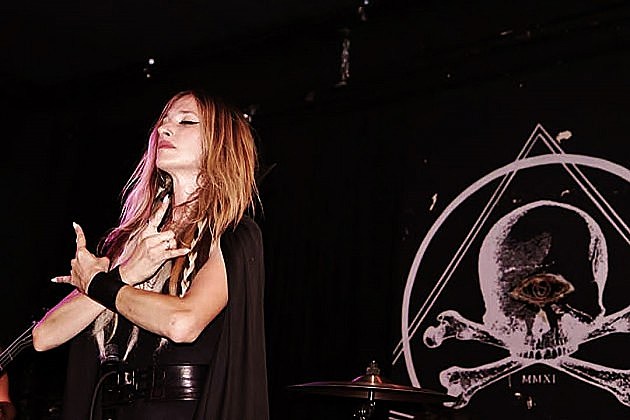 Huntress singer Jill Janus recently opened up about some serious health issues. In an interview, she revealed to fans that she’s been battling with several mental illnesses, as well as fighting uterine cancer. The singer said that she’s been hospitalized for bipolar disorder, schizophrenia and dissociative identity disorder at several times in her life. And recently, she underwent a hysterectomy to combat the early stages of uterine cancer and is now free of cancer.

In a post on Facebook, Janus updated her fans about her condition. She said that while she is still “cancer-free” she is “clearly not yet healed properly” from her operation. She went on to write that her doctor has told her that she needs one more month of rest. That means Huntress were not able to head out on tour with Avatar with Gemini Syndrome and First Decree. In the post (which we’ve posted in full below) she reveals their next gig will be on the Motorhead Motorboat Cruise from Sept. 28 to Oct. 2.

Two months ago I had major surgery and ever since I have been eager to get back on stage. On August 26th, Huntress played a sold-out show in Los Angeles at Loaded. The performance was incredible, my voice is strong, and I felt so happy to be back on stage. After the show, I had complications from uterine cancer surgery that left me in severe pain.
Although I am now cancer-free, I am clearly not yet healed properly. Due to doctor’s orders, Huntress will be unable to join the tour we were so looking forward to this September with Avatar, Gemini Syndrome and First Decree.
In one month, I will celebrate the return of my beast mode on the Motorhead Motorboat Cruise 9/28-10/2, as it will take one more month to properly heal from surgery. I’m so excited for the release of our new album Static on 9/25 and the amazing music video debut of “Sorrow” coming in a few weeks. Huntress will announce new tour dates soon and I can’t wait to meet our fans at many more shows to come! Sending my love to all my Creatures!

Huntress will release their third album, Static, right before the cruise, on Sept. 25. You can pre-order the disc here. Avatar and company kicked off their tour on Aug. 28 in South Bend, Ind., and will continue to play through Sept. 22 when they perform in Fredericksburg, Va.

Huntress Members Jill Janus and Blake Meahl Play ‘Would You Rather?’