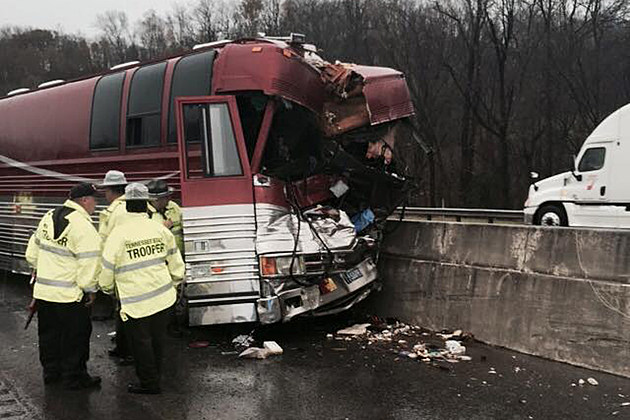 It’s getting to be that time of year again! The weather is becoming a factor and as many bands know, the roads can be a little more dangerous. Hinder found that out earlier today (Nov. 19) when the band’s bus was involved is a crash en route to their next show.

The incident happened outside of Cookeville, Tenn. and while everyone is okay, bassist Mike Rodden and the band’s lighting guy Clint both suffered broken ribs in the accident. The band’s bus driver was reportedly being transferred to a hospital in Nashville as well. However, they briefly lost one key member of their “crew,” a service dog named Cuzco who went missing after the accident. The band posted about the accident with a photo of their smashed up bus and the missing dog shortly after the incident.

The good news is that Cuzco was eventually found, but the band revealed that their driver Dave was in surgery and were asking for thoughts and prayers. See their post below:

Hinder have been touring in support of their When the Smoke Clears album. They currently have dates booked through Dec. 19 in San Leon, Texas. See their upcoming shows here. An official announcement concerning their show tonight in Charlotte, N.C. has yet to be made. The band is also booked to play in Baltimore and Asbury Park this weekend. Stay tuned to see if the injuries and crash affect any of their upcoming dates.