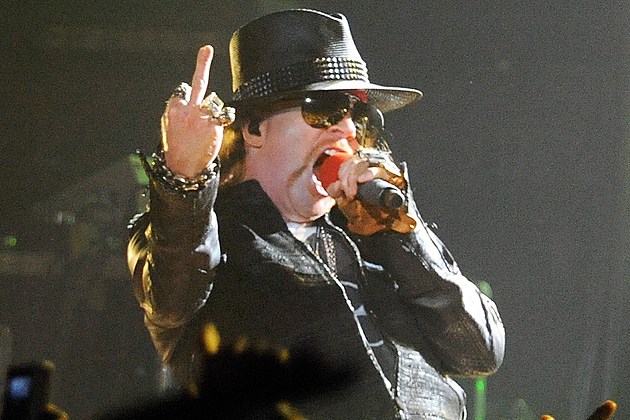 Guns N’ Roses took to Twitter to respectfully poke some fun at individuals who feel they’re responsible for the band’s current reunion. This comes just a couple of days after Aerosmith‘s Steven Tyler claimed partial responsibility on The Howard Stern Show.

“I’m sure I’m not solely [responsible for the reunion],” Tyler began, “But I did meet Axl in a couple of clubs a year ago and two years ago and three years ago. I bumped into him, and I had that talk… I said, ‘You need to get f–king back together again soon, because we all miss you.’”

Comedian Andrew Dice Clay has also taken credit for the reunion. Dice has been friends with GN’R road manager Tom Mayhew for many years, suggesting that Slash should tweet something nice about Axl Rose. Soon after, Slash wished Axl a happy birthday via Twitter back in 2012.

Just for the record, we asked Slash what he admired most about Axl Rose during a video interview with the guitar legend. Therefore, we take FULL responsibility for Guns N’ Roses reuniting. You’re welcome, world.

As for Guns N’ Roses’ take on the situation, a quick tweet slapped potentially overzealous entertainers down a peg:

So far, Guns N’ Roses have confirmed a headlining slot on the 2016 Coachella Festival along with two additional shows in Las Vegas, but rumor has it that more gigs will be announced.