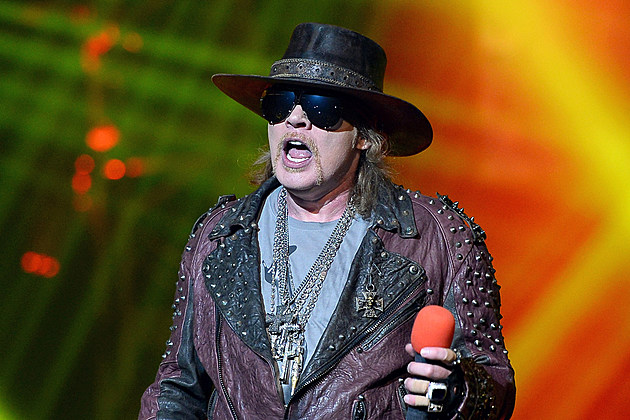 The return of Slash and Duff McKagan to the Guns N’ Roses lineup with longtime frontman Axl Rose is one of the biggest stories of the year and to mark the occasion, the Rock and Roll Hall of Fame has put together a new exhibit celebrating the 2012 Rock Hall inductees.

The “Legends of Rock” exhibit begins Feb. 26 at the Rock Hall in Cleveland, but to kick things off the Rock and Roll Hall of Fame will host a special Guns N’ Roses-themed evening on Feb. 17.

“We are thrilled to add Guns N’ Roses to our Legends of Rock exhibition,” says Rock and Roll Hall of Fame President & CEO Greg Harris. “Their legacy and impact is remarkable and we are excited to share these items with fans during this historic reunion year. Slash is incredibly supportive of the Rock Hall, and by donating his Les Paul and pinball machine, he helped made this exhibit possible.”

Items on display will include a Guns N’ Roses pinball machine owned by Slash, a black top hat that curls at the edges worn by Slash, a button down madras plaid shirt with cutoff sleeves worn by Axl Rose, a black Colorado Rockies short-sleeved jersey worn by Dizzy Reed, a Prototype Slash guitar handmade by Kris Derrig and black leather Converse high-top sneakers worn by Slash.

Other artists currently represented in the “Legends of Rock” exhibit include the Allman Brothers, Metallica, ZZ Top, Bruce Springsteen, David Bowie, the Beach Boys, the Who, George Clinton and Parliament Funkadelic, Michael Jackson, the Supremes, Beyonce and Aerosmith.

During the special event on Feb. 17, those attending will enjoy discounts on Rock Hall exhibits, happy hour drink specials and a chance to win an opportunity to play the Guns N’ Roses pinball machine. Admission is free, but a museum admission ticket will be needed to tour exhibits. View details at the Rock Hall website.