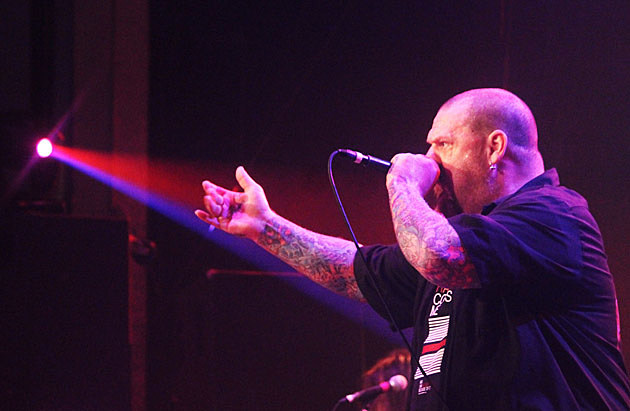 The split between Exodus and former vocalist Rob Dukes hasn’t been the most amicable parting. Dukes has been very vocal about his displeasure towards his former bandmates, and on a recent edition of the Opie and Jim Norton Show, Dukes called Exodus’ new material “regurgitated s–t” with “no passion in it.”

Back in October, Dukes said, “F–k those douchebags,” during an interview. “I never have to talk to them again…or their managers, and that’s such a good thing. It’s like I cut a cancer out of my life.”

When asked about his Exodus stint by Opie and Jim Norton, Dukes responded, “It ran its course. And then… You know, they ended it really s–tty. I’d been touring with them for almost 10 years. And they got new management, and I could slowly feel the edge slipping away … You know how you always look back at s–t and you [go], ‘Ahh… I should have just quit.’ I was unhappy. I didn’t like the new music they were writing. I thought it was s–t. And I voiced my opinion. It turned everyone against me, and that was it.”

Dukes continued, “There was just no passion in it. It was just regurgitated s–t that we had just done and done over and over again. There was no life to it, so I just kind of started to separate myself. And then… I was under a lot of [pressure]. I was getting married, I was moving, I had a ton of s–t going on. And they had fired me on my honeymoon — like, three days after my wedding, which really just sucked balls. And honestly, I’ve never heard from any of them. And it just kind of left me a little angry. But I’m over it now. I’m f—ing doing way better than I ever have before.”

Rob Dukes’ current band Generation Kill is working on a collaboration with legendary rapper DMC. The two connected and started to work on a new record after DMC heard Generation Kill’s We’re All Gonna Die album. “We have eight songs done, three more to go, and then we’re gonna do some hidden-track s–t,” said Dukes. “It’s really cool, ’cause it’s different than anything I’ve ever done before. It’s challenging as f— to not be a s–t rap/metal band, to kind of bring those two together. ‘Cause I’m not really a metalhead; I’m more like a rock and roll kind of [guy].”

Gary Holt Plays ‘To Exodus or Not to Exodus?’