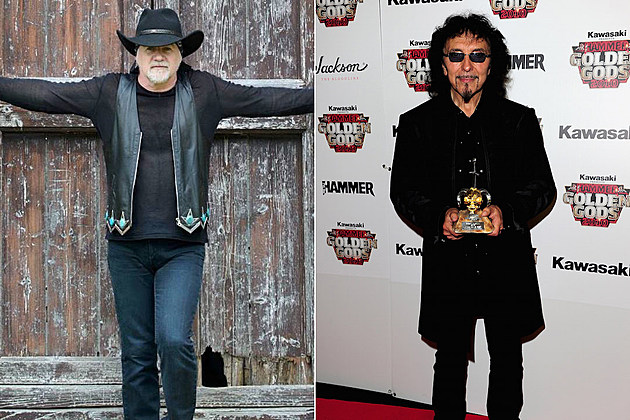 Former Black Sabbath singer Tony Martin was in attendance at the unveiling of late drummer Cozy Powell’s (Rainbow, Black Sabbath) memorial plaque in Cirencester, U.K. yesterday along with Tony Iommi and others. Despite Martin performing with Iommi and Sabbath on five studio albums, the two had not spoken in over a decade, but now they have caught up and even plan on working together again.

In a post on the singer’s Facebook page, he shared the details of his interaction with the legendary Sabbath guitarist, stating “Well what a great day… I attended the unveiling of Cozy Powell’s memorial plaque in his home town of Cirencester, along with Brian May, Neil Murray, and Tony Iommi… And to my surprise was greeted by Tony Iommi VERY warmly. Its the first conversation of any length I have had with him in 15 years!!!! ….. and it turns out we may well be working together soon!!!”

Of course, Martin will most likely have to wait until Black Sabbath’s farewell tour is over, which has yet to have a definitive end date. While the world still waits in limbo on a new album from the masters, Ozzy Osbourne has made it clear there will not be another. Iommi also stated, “I’ve got so many riffs. I wrote a whole load of stuff for another album and we met up in L.A. but the others… well, Geezer [Butler] didn’t particularly want to do another album.” He went on to add, “Then again, after you’ve just had a No. 1 album, where do you go from there? For the last LP, we did record 16 songs, so we may still put something out from that. We don’t know yet. Do I intend to stop playing? No. It’s the touring, really [that is difficult]. I’d love to do something with the guys. But, whatever happens, I will do something.”

Martin spent nine years fronting Black Sabbath, replacing Ray Gillen during the studio sessions for The Eternal Idol in 1987. Due to the rush the band was in, Martin recorded Gillen’s parts note for note, but was able to add his own style on the next record, Headless Cross. He was last featured on Forbidden before being ousted in favor of reuniting the band’s original lineup in 1997. He has been involved with numerous projects, most recently completing studio albums in 2012 and 2013 with the Cage and Giuntini Project respectively.