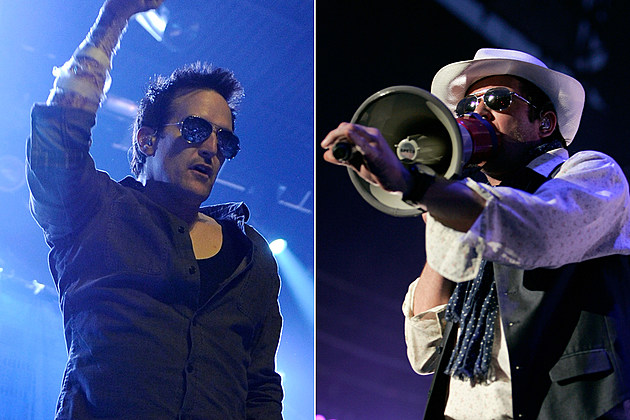 Earlier this year, Filter‘s Richard Patrick opened up about his concern for Scott Weiland‘s sobriety in an interview and his fear that fans we’re enabling his reckless behavior. Those comments didn’t exactly sit well with Weiland, who claimed that he hadn’t “had a needle in my arm in thirteen years” and urged the vocalist to back off his public comments as he’d worked hard to repair his reputation. In a new Facebook posting, Patrick is speaking about Weiland’s passing for the first time and using it as motivation for himself to stay sober.

As a refresher, Patrick stated in an interview earlier this year, “We all want Scott to be Scott, but Scott’s not even really Scott. I love him, but he’s transformed into a very different person. Bless his heart, and I hope he gets sober and everything.” He would go on to add, “[Some Stone Temple Pilots fans say], ‘He’s a badass rock and roll star. You can’t have STP without Scott Weiland.’ Okay, well, you’re gonna get what you want — he’ll be a rock star legend that died in a hotel room with a needle sticking out of his arm, and it will not be a cool thing and it will be sad and his kids will be traumatized. It’s bizarre that the biggest enabler for Scott is the audience … at least [as] of a couple of years ago. I don’t know what it’s like now.”

In response, Weiland revealed, “Overcoming my addiction to heroin was the hardest thing I’ve ever done, and I’m damn proud of the fact that the time in my life when drugs were stronger than my commitment to my health is so far behind me, and always will be. By the way, man, I recall when I DID do drugs, and you were one of the guys getting high with me. It’s behind you, please note and respect that it’s behind me too.”

In his new comments, posted on the Filter Facebook page, Richard Patrick offers:

I’m sorry Scott. You know.. I was trying to help.. You were mad at me when I went public with my comments on your addiction.. and pissed you off just to get you to hear.. I figured if I lost a friend in order to help him it was worth the risk.. I figured if the shoe were on the other foot.. maybe one day you could hit me back somehow if I went out. People think it was lame or a publicity stunt but all I wanted was for you to hear me, if not all of us.. Bless you Scott. I will learn from your mistakes. I will be sober because of you.. Your death won’t be in vain.. Whenever I feel the temptation to use I will say too myself…
For Scott, not today.
-RP

Weiland passed away Dec. 3 at the age of 48. He was discovered aboard his tour bus unresponsive and the first responders reported that he was in cardiac arrest. As has been revealed in the time since his death, a search of the singer’s tour bus uncovered a substance that tested positive for cocaine, as well as opiates, medication for his bipolar disorder, Viagra, synthetic opiates, sleeping pills and a baggy containing a green, leafy substance. A toxicology report revealing the cause of death is not expected for the next month to a month and a half.

See How Old Richard Patrick + Other Rockers Are