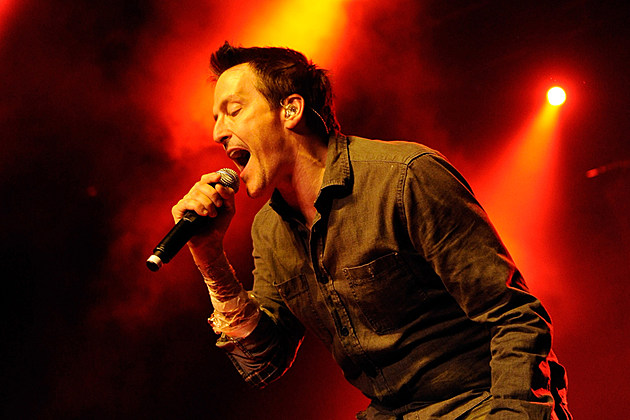 Filter are on their way back with Crazy Eyes, their seventh studio album, and they’ve just unveiled the first single from the disc. The song, called “Take Me to Heaven,” just debuted at Billboard and can be heard in the player below.

Frontman Richard Patrick, who also produced the album, tells Billboard he penned the song after losing his father. “‘Take Me to Heaven’ was written after my dad just died, and where I’m coming from is I’m trying to find if there’s an afterlife and I’m trying to believe in it. It’s very hopeful,” says the singer. “There’s no more authentic and real that I could have gotten as a singer and lyricist.”

As you can hear, the song has an industrial feel, something that the rocker and his band have been embracing of late. “This record is more experimental and crazy. It’s where I am today. I wanted to go to some scary, weird places instead of doing that big-ass guitar sound again,” says Patrick, who feels that taking a more hands-on approach allowed him to be the artist he wanted to be.

He adds, “I feel so strongly about having it be weird and intense and authentic and bizarre, because we’ve done ‘perfect.’ This is a new era for me because it’s the first time I’ve totally produced the record, and I made it raw and real the way I wanted it.” The Crazy Eyes album will be released April 8 via Wind-Up Records.

Joining Patrick in the band for this album are guitarist Oumi Kapila, bassist Ashley Dzerigian, drummer Chris Reeve and keyboardist Bobby Miller. The group will hit the road soon, with the schedule just starting to fill up thanks to festival appearances. Keep abreast of their tour dates here.

Filter, “Take Me to Heaven”

See How Old Richard Patrick + Other Rockers Are