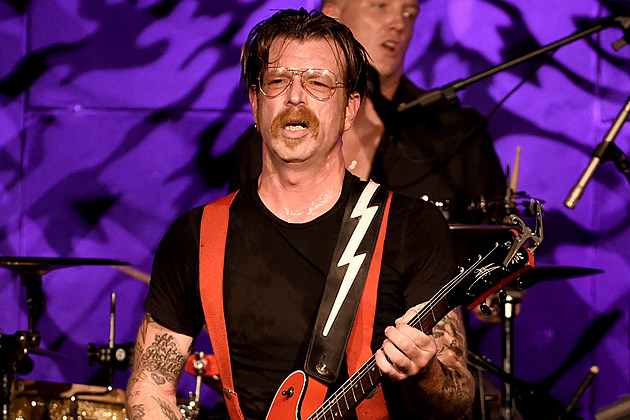 In their triumphant return to Paris less than one month after the ISIS attacks at Le Bataclan, Eagles of Death Metal performed as guests with legendary rock act U2. The band had vowed to return to Europe to finish their canceled tour as well as be the first band to play Le Bataclan when it reopens. Before doing so, they had to overcome the fear of getting back onstage.

Frontman Jesse Hughes spoke with Rolling Stone about the U2 performance as well as the hospitality he received from frontman Bono and the rest of the group. Reflecting on the events, he said, “Bono knows that I’m a Christian, and he also knows I’m a mama’s boy. The very next day [after the attack], a courier came with a phone that had a note that said, ‘This is from Bono. Make sure you call your mom.’” Touched, he added, “I thought that was awesome. It was the first time that I really got to talk to my mom without being in a police station, and that meant the whole world to me at that moment.”

“Then Bono called because I needed advice,” Hughes went on. “I felt like the best person to ask for advice on how to deal with this is someone who’s rubbed elbows with world leaders. And he just prayed with me on the phone. He kept my head off of things, and then U2 visited the memorial site and delivered lyrics of ours that he thought were appropriate.” Noting the importance, he mentioned how close he likes to stay with his fans and the fact that some did not make it out of the venue hit hard.

Returning to U2 reading Eagles of Death Metal’s lyrics, Hughes stated, “…that little detail, just on a personal note, is something that nobody else would ever know that it mattered, but it mattered to me. I didn’t know how I was ever going to get back onstage again.”

By going back on stage, “U2 were trying to make sure we didn’t have something in us killed,” Hughes said. The Eagles of Death Metal performed Patti Smith’s “People Have the Power” with U2 and then were granted the stage to perform their original “I Love You All the Time.” Hughes commented, “They would have accomplished their goal if they had just performed the song with us. They didn’t have to give us the stage for the last song. And they did. They took care of us completely. They were genuine and sincere, and they were very proud of our accomplishments after the fact. That was such a beautiful way to put training wheels on for performing.”

Eagles of Death Metal recently announced a 2016 European Tour beginning on Feb. 13 and closing out March 5 before heading to play Lollapalooza in South America. For a full list of dates, click here.