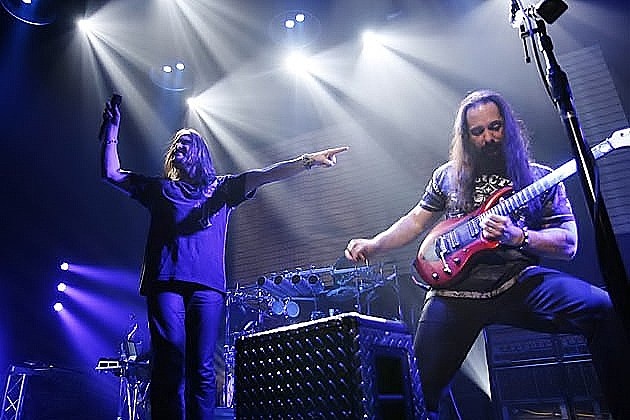 It looks as though Dream Theater‘s upcoming album will be a little bit more involved than the traditional album. As many who have followed the band know, the group is not averse to doing concept-based discs and a new website launched for the album suggests we might be in for something quite involved.

The top of the site has a heading that says “Characters” and features silhouettes of specific characters assumed to be involved in the overall story for the disc. At press time, the only character completely revealed was named Emperor Nafaryus.

There is also the beginnings of a map, assumed to feature the expanse of land on which the story takes place. Given that there’s a character who is an emperor, we can guess that The Astonishing album will likely address some sort of battle between different factions.

The site also breaks down the track listing into two “acts.” The first act has revealed songs titled “Descent of the Nomacs,” “Dystopian Overture,” “The Gift of Music,” “The Answer” and “A Better Life” as of press time, with space for more song revelations in both the first and second act.

It appears as though the site will eventually unlock a pair of music videos and there’s a robotic image under the name “Nomacs” at the bottom of the post which could turn into something by the time the site is filled.

So, for fans looking to solve the mysteries and dig a little deeper into the songs that will make up The Astonishing, be sure to check out Dream Theater’s new website.

The band recently revealed they intend on playing The Astonishing in full on dates for their upcoming European tour.